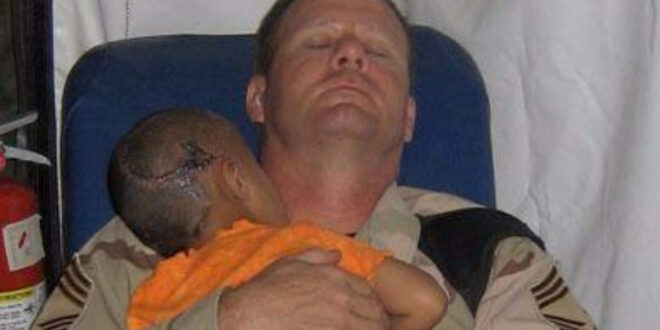 According to an article in Air Force Print News in November, 2006, the story is true and so is the photography shown below.

Chief Master Sgt. John Gebhardt, was superintendent of the 22nd Wing Medical Group out of McConnell Air Force Base in Kansas. The picture was taken in October, 2006, while he was deployed to Balad Air Base in Iraq.

The young girl had been shot in the head and had extensive injuries. The insurgents that  shot her also killed both of her parents and many of her siblings, according to the article. It was a tough, but heartwarming story… with a picture of John Gebhardt in Iraq.

John Gebhardt’s wife, Mindy, said that this little girl’s entire family was executed, but the insurgents failed to kill her. She was cared for in John’s hospital and was healing up, but she continued to cry and moan. The nurses said John is the only one who seemed to calm her down, so John spent four nights holding her while they both slept in that chair.

John is a real Star of the war… and he represents everything America is trying to do.

This, my friends, is worth sharing with the WORLD! You’ll rarely see things like this in the media. Please keep this going… the American public needs to see pictures like this and needs to realize what we are doing in the Middle East is making a difference… even if it is just one little girl at a time.

Wouldn’t it be fitting if this went completely around the world! You can verify the TRUTH of this here at TruthorFiction.com.

User Rating: Be the first one !
Share
Previous A Walk with The Lord
Next POW Story About The Pledge Of Allegiance