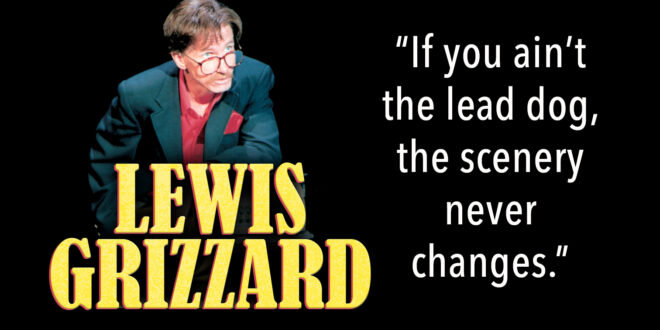 Greatest Headline in the History of Sports Journalism

Happy Dicks was a linebacker at the University of Georgia in the mid-60’s, which will make this article about the journalist from Georgia, the late, Lewis Grizzard, AΦ ’68, that much funnier.

On the eve of the Georgia – South Carolina game 41 years ago, I was hanging out with three Sigma Pi brothers (the Hound, Tex, and Bake), drinking a few cold PBRs at the old Callaway Gardens Apartment on the Atlanta Highway. We were discussing the upcoming game against the Gamecocks and lamenting the fact that we were going in with several key players out with injuries, including our starting DE, Billy Payne and his roommate, MLB, Happy Dicks.

About 10:00 that night, another fraternity brother, Lewis Grizzard, came in after he got off work. Our buddy was inactive at the time because he had gotten married over the summer to his high school sweetheart, Nancy. In addition to taking a full load at the University, he was working two jobs to help pay for (as he called it) “this expensive habit.”

A talented young man, he was writing two columns daily – one in the morning for the Athens Banner Herald and one in the afternoon for the Athens Daily News. Lewis walked in, went straight to the refrigerator, got a beer, plopped down in a chair, pushed his glasses back up his nose and announced, “Gentlemen, with any luck at all, tomorrow morning you’ll witness journalistic history. I have submitted my column and if it gets by my editor – and there’s a good chance of that happening, since he looked drunk earlier this evening – you’ll enjoy the greatest headline in the history of sports journalism.”

He refused to tell us what it was, and to be honest with you, we all forgot about it. As Lewis went home to his lovely, young bride, the four of us went back over to the Fraternity house to get a head start on the weekend.

The next morning, as usual, I went straight for the Sports Section. As I pulled it out, I could do nothing but smile, because our buddy had pulled it off. To this day, Vince Dooley calls it his most memorable column ever – all because of the headline, which read:
DOGS TO PLAY COCKS WITH DICKS OUT

There’s no doubt about it, it was “the greatest headline in the history of sports journalism.”

User Rating: Be the first one !
Share
Previous The Pain of Forgiveness
Next The Insults Story