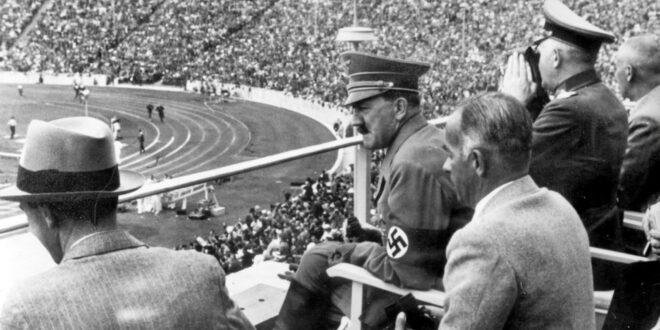 The 1936 Berlin Olympics were to be Adolf Hitler’s stage to validate Aryan superiority, the Nazis’ belief in a master race. In three races and one long jump, American Jesse Owens, as much as anyone, laid waste that philosophy.

In a performance that would remain unmatched for 48 years, Owens won four track and field gold medals in the same Summer Olympiad, setting three world records and one Olympic record. He was born James Cleveland Owens in Oakville, Ala., on Sept. 12, 1913, the son of a sharecropper. After his family moved to Ohio, he became known as Jesse, derived from his initials J.C.

On Aug. 2, 1936, the 22-year-old Owens began what was supposed to be the quest for triple gold by winning the 100 meters in an Olympic-record 10.3 seconds. Hitler was photographed with most winners, including women’s javelin gold medalist Tilly Fleischer of Germany.

The Associated Press reported, however, “Der Fuehrer left before the “ceremonie Olympic protocolaire’ ” celebrating victories by Owens and other black Americans. Instead, Hitler congratulated two German champion hammer throwers in his private headquarters under the stadium.

The long jump was two days later, and Owens won it — setting an Olympic record of 26-53/8 — with the help of Germany’s Luz Long.

“We had three (qualifying) attempts to make it to the final, but I fouled twice,” Owens recalled. “I was scared stiff that I would blow it on my third and last attempt. …

“Then Long came over to me and in broken English said, “Jesse, let me make a suggestion. I will place my towel a foot in front of the foul line and you can use this for your takeoff.’ “

Since the qualifying distance was 3 feet shorter than Owens’ usual jumps, he qualified with ease, then won the gold (Long took the silver) in the final.

“After my victory was secure,” Owens said, “Luz was the first one to greet me, and we walked arm in arm right in front of Hitler’s box. Hitler must have gone crazy watching us embrace.”

The next day, Aug. 5, the AP reported that Owens “completed his classic Olympic triple title conquest in record-smashing style in the rain,” winning the 200 meters in an Olympic-record 20.7 seconds.

Hitler, the wire service said, “was driven from his official box by a heavy downpour of rain just after Owens flashed across the finish line … and wasn’t among the thousands of die-hards who remained and thundered acclaim when the Negro stepped up for the third time to be crowned with a laurel wreath and given his third gold medal and oak tree that will be planted on Ohio State’s campus.”

That was supposed to be the end of Owens’ odyssey.

But on Aug. 9 he won his fourth gold medal, leading off the 4×100-meter relay that would set a world record at 39.8 seconds. In the process, he became part of an Olympic controversy that persists.

Owens was ordered to run on the relay team, along with Ralph Metcalfe, Foy Draper and Frank Wykoff. Two Jewish teammates, Marty Glickman and Sam Stoller, were dropped. AP sports editor Alan Gould wrote that “the 15-meter margin by which the Americans licked Italy, with the “feared’ Germans placing third only because Holland was disqualified for dropping the baton, didn’t appear to justify the eleventh hour lineup switch.”

The American team met the day before the final, Owens said, and was told Glickman and Stoller would not run. “We were stunned,” he said.

The rumor was that the Nazi hierarchy asked our officials not to humiliate them any further by using two Jewish athletes to add to the gold medals black athletes had already won.”

“I protested, saying, “I’ve won three gold medals. Let Marty and Sam have their chance.’ Quickly and forcefully I was told to shut up. We won … but we would have won just as easily with Marty and Sam.”

The Chicago Defender carried an article from Berlin. It began: “Jesse Owens is the god of the sports fans here.”

He said years later that hundreds of German frauleins — apparently unaware or not caring that he was married and the father of a young daughter — sent him perfumed love letters, many suggesting trysts.

And while much was made of his being snubbed by Hitler, Owens noted, “I wasn’t invited to the White House to shake hands with the President, either.”

© St. Petersburg Times, published December 28, 1999
— Information from Times files and the 100 Greatest Moments in Olympic History by Bud Greenspan (General Publishing) was used in this report.

Previous Personality Test
Next Do you believe in miracles?