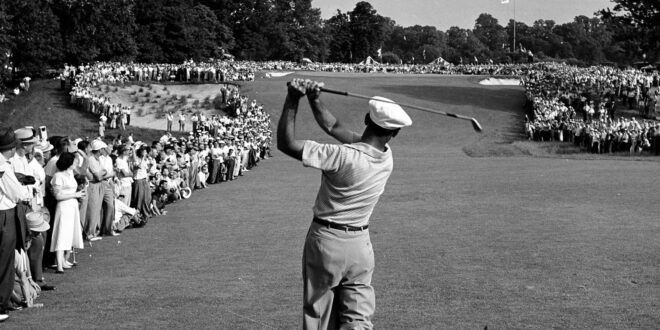 No matter. On July10, 1953, Ben Hogan tamed the course with a record final-round 4-under 68 to win the British Open and complete the first Triple Slam in golf’s storied history.

He had won the Masters at Augusta and the U.S. Open at Oakmont before taking on Carnoustie.

Hogan passed on the PGA Championship; the July7 end of that tournament came the day before the start of the British Open. And Hogan would have had to do an inordinate amount of walking to win the weeklong PGA Championship. He just wasn’t up to it, not after a near-fatal accident four years earlier.

His left leg had been crushed, his pelvis, collarbone and a rib fractured when his car collided with a bus on a highway in Texas. He survived, but doctors weren’t optimistic that he would ever play golf again.

But just 16 months after the accident, Hogan staged one of sports’ most remarkable comebacks. His legs taped from ankle to thigh and exhaustion setting in, Hogan slid into a three-way tie after the requisite four rounds in the 1950 U.S. Open at the Merion Golf Club. Then he shot a 69 in the playoff to beat Lloyd Mangrum (73) and George Fazio (75).

At Carnoustie three years later, the enemy was rain and dusk and the pressure of playing for a Triple in a foreign land, in front of massive crowds rooting for their countrymen.

His 282 was second-best ever in the British Open. It also was the only British Open Hogan ever played.

“I didn’t come here to take the trophy,” the weary Hogan said almost apologetically. “My purpose was to play in the British Open. Naturally, I intended to play my best.” That he did.

The comeback was complete.

When the tournament was over and Hogan had his Triple, he received an ovation much like the kind Carnoustie’s spectators reserve for their fellow Scots.

Bobby Jones, who in 1930 had won the Grand Slam of its day (the U.S. and British opens and amateurs), was effusive in his praise of Hogan. “Wonderful, simply wonderful,” he said. “Under the conditions, that was a marvelous accomplishment. Nobody who has not been up against it in similar fashion can begin to understand what a handicap it is to be a great player to have thousands of people crushing around him in a championship tournament.”

© St. Petersburg Times, published October 19, 1999  — Information from the Associated Press was used in this report.

Previous Remembering the ‘Miracle in Miami’
Next Behind gimpy Reed, Knicks make stand