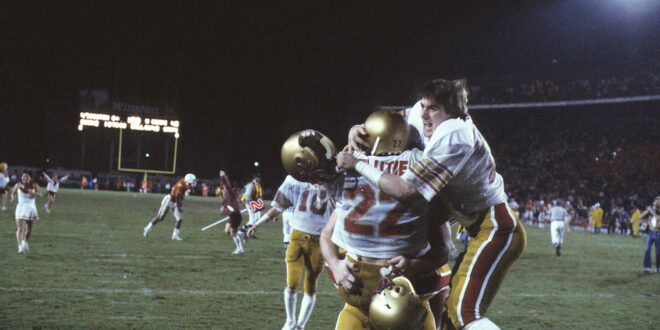 Dan Davis: Here’s your ballgame, folks, as Flutie takes the snap…He drops straight back…has some time…Now he scrambles away from one hit…looks…uncorks a deep one for the end zone…Phelan is down there…

Cappelletti: I don’t believe it!

— This transcription of the WRKO-AM broadcast of the 1984 Boston College-Miami game, and all other italicized sections in the following story, are taken from “Tales from the Boston College Sideline,” by Reid Oslin

On Nov. 23, 1984, Doug Flutie’s last-second 48-yard “Hail Mary” touchdown pass to Gerard Phelan gave the football Eagles a thrilling 47-45 victory over the University of Miami and secured its own enduring place in both Boston sports and college football lore.

The storybook win was more than a major sports accomplishment for Boston College: It came as the school was emerging as a major national university. The Eagle football team played nine games on network television that year and the increased visibility was cited as a valuable factor in the rise in admission applications and alumni support that followed.

“That play has lived with me almost every day since it happened,” said Phelan, a 1985 graduate who today is a sales executive for a custom printing firm in Boston. “It’s remarkable. Rarely a day goes by when someone does not bring it up. It’s a great thing to be associated with,” he adds, “because whenever anybody talks about it they are always smiling. I’m lucky to be a part of it.”

Phelan, along with some 65 other players and coaches from that storied 1984 Boston College football team, returned to campus over the weekend of Nov. 5-6 to relive the “Miracle in Miami” play and the many other highlights of the Eagles’ Cotton Bowl championship season.

The Boston College Athletic Association hosted the ’84 team at a reunion dinner in Conte Forum on Friday evening, followed by a pre-game barbecue and halftime ceremony at the BC-Rutgers game on Saturday.

The current Eagle players wore 1984 “throwback” uniforms in honor of the returning gridiron heroes as they posted a 21-10 victory over Rutgers in Saturday’s game.

The focal point of the entire 1984 season, however, continues to be the famous Flutie pass to Phelan, a spectacular game-winning play that was seen by millions on CBS-TV that day and has been replayed countless times in highlight clips and on the ESPN Classic network.

Flutie, who won the Heisman Trophy as college football’s best player in 1984, was one of the few members of the Cotton Bowl-winning squad unable to attend the reunion weekend. At age 42, he is still playing professional football with the NFL’s San Diego Chargers.

Jack Bicknell, the Eagles head coach from 1981-90, summarizes that famous season affectionately: “We were tough, we were physical, but, boy, did we have a lot of fun.”

“It’s hard to believe that after 20 years, that play is as alive as it has ever been,” said Phelan, who estimates that he has done dozens of interviews in recent weeks as media outlets prepared “Hail Mary anniversary” stories on the game.

Troy Stradford ’86, the star running back on the ’84 team, doesn’t have to go far to refresh his memory of the famous moment. He’s a sports talk show host on WQAL radio in Miami, where he lives after playing professional football for the Miami Dolphins.

“Everyone remembers that play,” he said with a wide grin. “Down there they talk about it all the time.

“When I am asked about the game, I remind people that it wasn’t just the pass. It was an incredible football game,” said Stradford, who scored a rushing touchdown and was in the end zone as an extra pass receiver on the game’s final play. The two teams combined for nearly 1,300 yards of offense in the wild-and-wooly contest in the Orange Bowl that drew the highest college football television rating of the year in 1984.

The host Hurricanes figured they had won the game when UM running back Melvin Bratton scored a go-ahead touchdown with 28 seconds remaining in the game. “I bump into Melvin in Miami all the time” said Stradford. “We sit around and reminisce. He has at least one national championship to his credit, but I’ve got the ‘Hail Mary’ pass.

“It’s funny how none of them down there can shake that,” Stradford added with a laugh. “It’s still very vivid in their minds. It will go on forever.”

Two other members of the 1984 team, defensive end Bill Thompson ’88, MBA ’00, and defensive back Steve Williams ’88, recalled that they almost missed the bus from campus as the team departed for Miami on Thanksgiving Day. The two had gone to Williams’ family home in Providence for Thanksgiving dinner and were a few minutes late returning to Chestnut Hill.

“My greatest memory from that day was Coach Bicknell jumping off the bus and shouting ‘What are you freshmen doing showing up late? We should leave you home!'” recalled Thompson, now a national account manager for Fidelity Investments.

Williams, Thompson’s tardy travel partner that day, is now assistant principal at a San Francisco middle school. He often encounters devotees of the University of California-Berkeley who believe that the Golden Bears’ 1982 last-minute victory over Stanford – in which a UCal player scored the winning touchdown with the Stanford band in the end zone – to be the biggest play in college football.

Bicknell, now coaching in NFL Europe, added a somber thought as he spoke of the Miami game at the reunion event. “Not long ago I saw that game replayed on one of the cable networks,” he said, “and right at the end of the game, something hit me as I watched Flutie throw the pass and then get carried down the field by Steve Trapilo.”

Trapilo, who went on to a 10-year career in professional football, died of a heart attack last May at age 39.

“I don’t know if I will ever be able to watch that game the same way ever again,” Bicknell said.

User Rating: Be the first one !
Share
Previous Wooden retires after 10th title
Next Slam finishes off Hogan’s comeback