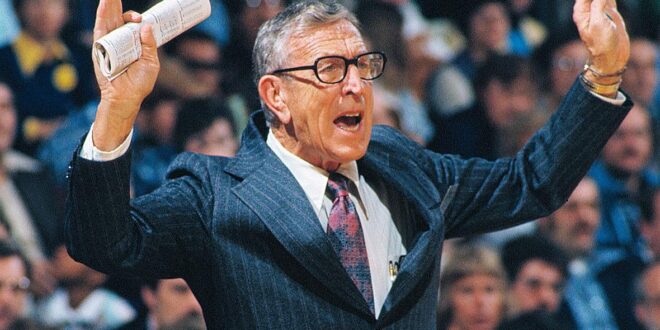 And these Bruins, minus the star-power players of the past like Walt Hazzard, Lew Alcindor and Bill Walton, did not seem certain of regaining their crown. But on the eve of the championship, the Wizard of Westwood announced his retirement.

If there was any question that UCLA couldn’t win one more game for Wooden, it virtually vanished in the emotional surge that followed.

When the game ended, when the final horn sounded in the San Diego Arena on March31, 1975, UCLA had a 92-85 victory over Kentucky and Wooden, in the final game of his 27-season career, had the net draped on his shoulder, an epaulet of triumph. The crowd of 15,153 gave him a four-minute standing ovation.

He left with 10 championships in 12 seasons from 1964-75. And to cynics who said anyone could have won with the stars he assembled, Wooden replied: “You get a good run of players, a dominant player like Alcindor and people say you’re supposed to win three championships and we did.

“But Ohio State was supposed to win three with Jerry Lucas and John Havlicek and that bunch, and it won only one. Kansas was supposed to win three with Wilt Chamberlain and one year they didn’t even win their conference championship. … For the most part, we’ve done what we’re supposed to do. There’s no way you can have consistent success without players. No one can win without material. But not everyone can win with material.”

This edition of Wooden’s Bruins did it because, knowing his players couldn’t outmuscle the bigger Wildcats, he had them running up and down the court from the opening tipoff. Even more remarkably, Wooden won employing just six players — Dave Meyers, Rich Washington, Ralph Drollinger, Marques Johnson, Pete Trgovich and Andres McCarter.

The Bruins committed 19 fouls. None fouled out. Four ended the game with four personal fouls, one short of the maximum.

Trgovich scored 10 of UCLA’s 12 points in a five-minute stretch late in the first half when the Bruins took the lead for good. Washington had 28 and Meyers 24, more than offsetting the 34 by Kentucky’s Kevin Grevey.

The dynasty was at an end. And to those like Pepperdine coach Gary Colson, who had said UCLA’s dominance was hurting basketball, Wooden had another ready reply:

“The same thing was said about the Yankees in baseball. Whether it’s an individual or a team, whenever you reach a plateau of excellence, there are always a lot of people who want to see you knocked down. Then, when that happens, they don’t know what they were complaining about. There were those who wanted to see Joe Louis get whipped when he was heavyweight champion all those years. Then, when he did, they were sorry.”

© St. Petersburg Times, published November 16, 1999
— Information from the New York Times was used in this report.

User Rating: Be the first one !
Share
Previous Namath, Jets make statement for AFL
Next Remembering the ‘Miracle in Miami’