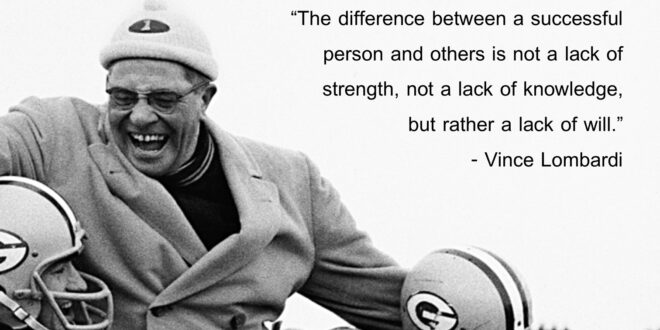 Vincent Thomas Lombardi is arguably the greatest football coach of all time, and is on the short list of history’s greatest coaches, regardless of sport. His ability to teach, motivate and inspire players helped turn the Green Bay Packers into the most dominating NFL team in the 1960s.

In 1971, the National Football League paid Lombardi the greatest honor of all time in any sport… they named their Championship Trophy, awarded each year to the winning team of the Super Bowl, “The Vince Lombardi Trophy.” His influence lives on, in all walks of life and career, immortalized by the sharing of his inspiration and motivational quotes. You can read many of his quotations here at Inspire21 – click here.

The oldest of five children, Vince Lombardi was born in Brooklyn, New York on June 11, 1913. As the son of an Italian immigrant, Lombardi was raised in a strict Catholic household. In 1928, at the age of 15, Lombardi entered the Cathedral College of Immaculate Conception to study for the priesthood. Deciding on a different career path two years later, Lombardi transferred to St. Francis Preparatory and starred as fullback on the football team. Upon graduation, Lombardi attended Fordham University and starred on the football team, where he was a member of Fordham’s famed “Seven Blocks of Granite.” After graduating magna cum laude from Fordham in 1937, Lombardi attended law school in the evenings while working for a finance company during the day. Lombardi once again shifted gears, deciding to take a teaching and assistant football coaching position at St. Cecilia High School in Englewood, New Jersey. During his successful 8-year stint at St. Cecelia, Lombardi married Marie Planitz in 1940 (with whom he had two children, Vince Jr. and Susan).

Lombardi joined the coaching staff at his alma mater, Fordham University, in 1947 and enjoyed a two-year run there. But Lombardi couldn’t resist the opportunity to continue his coaching career at West Point in 1949, while learning under the direction of the great Red Blaik. It was during this time as an assistant to Blaik that Lombardi identified and developed what became the hallmark of his great teams……simplicity and execution. He developed a reputation for being a tireless workaholic, a trait that helped Lombardi land a position as assistant coach in the NFL for the New York Giants. During his five years with the Giants, Lombardi helped lead the Giants to five winning seasons, culminating with the league championship in 1956.

Lombardi became a hot commodity in the coaching arena, accepted the head coaching position and signed a five-year contract with the Green Bay Packers in January 1959.

From the outset, Lombardi established himself as a coach firmly in charge. He conducted grueling training camps and demanded absolute dedication and effort from his players. His hard-edged style turned the Packers into the most envied and successful franchise in the 1960’s, leading them to five NFL Championships, including victories in Super Bowl I and II, and solidified Lombardi’s status as the greatest football coach in history. After a two year break from coaching, Lombardi returned to lead the Washington Redskins in 1969, promptly leading them to their first winning season in more than a decade.

Tragedy struck as Lombardi was diagnosed with an aggressive form of colon cancer in June 1970, and died a short ten weeks later on September 3, 1970 at the age of 57. A beloved national icon, thousands of people attended two separate funerals. Shortly after his death, Lombardi was inducted into the Pro Football Hall of Fame, as well as honored by the NFL by having his name adorn the trophy awarded to the Super Bowl champion each year.

• Began head coaching career with the Green Bay Packers in 1959
• Was named NFL Coach of the Year in 1959, his rookie season
• Won 5 NFL Championships, including Super Bowls I and II, during his tenure with the Green Bay Packers
• Inducted as a charter member of the Fordham University Hall of Fame in 1970
• Shortly after his death in 1970, the Rotary Club of Houston established the Lombardi Award, an annual honor that recognizes the nation’s best collegiate lineman
• Posthumously inducted into the Pro Football Hall of Fame in 1971
• In his honor, the NFL renamed “The Super Bowl Trophy” to the “Vince Lombardi Super Bowl Trophy” in 1971
• Inducted into the Green Bay Packers Hall of Fame in 1975
• Was a member of the famed “Seven Blocks of Granite”, the nickname given to Fordham University’s famous offensive line