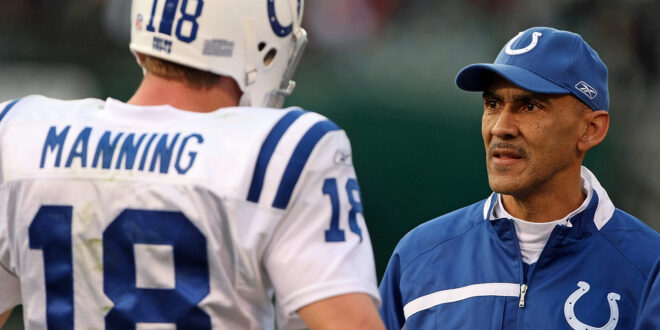 It was with great pride and joy to watch the Colts, led by Head Coach – Tony Dungy, win their trip to the Super Bowl.  While, not a big football follower, there was good reason and insight to support and cheer with enthusiasm for Tony Dungy’s Colts team?

Below is a very touching story about this great man, and the essence of his purpose in life. It was most amusing to hear Coach Dungy’s responses to the TV  sports interviewer, when he was asked how great it was to be one of the first “African-American” head coaches to take his team to a Super Bowl?  Head Coach “Tony Dungy” responded immediately with: “Yes that’s good, but what is really great and awesome, is how God worked this out for us; it’s just amazing how He made this all come together!”  Thus, (as Paul Harvey would say after reading the following) “and now, you know the rest of the story.”

DETROIT, Mich. – They were there for breakfast, and they were there to cheer New York Jets running back Curtis Martin. And it was Martin who received the Athletes in Action Bart Starr Award Saturday morning, but the hundreds who gathered in fourth-floor ballroom at the Marriott Renaissance in Detroit, Mich., on the morning befor e Super Bowl XL were clearly touched by the featured speaker.

Two hours into the breakfast, emcee Brent Jones introduced Dungy, who was welcomed with a lengthy standing ovation. Dungy thanked the crowd, shared an anecdote about Martin, then told the crowd he was going to speak for about 15 minutes.

“It’s great to be here,” Dungy told the crowd, then adding with a laugh, “I just wish I wasn’t here in this capacity so many times of being just that close to being in the game and just being an invited speaker.

“My goal is to have our team here one day and have a couple of tables with all of our guys here. Because we have a special group of young men, a great group of Christian guys. It’d be wonderful to have them here so you could see their hearts and what they’re all about.

“It hasn’t quite happened yet, but we’re still hoping one day it will.”

He told them he was going to talk about lessons he had learned from his three sons. The crowd fell silent. Then Dungy spoke.

And although this was a breakfast – and although at many such events speakers speak over the clinking of glasses and murmurs from semi-interested listeners – for most of the 15 minutes the room was silent except for Dungy’s voice.

He spoke of his middle son, Eric, who he said shares his competitiveness and who is focused on sports “to where it’s almost a problem.” He spoke of his youngest son, Jordan, who has a rare congenital condition which causes him not to feel pain.

“He feels things, but he doesn’t get the sensation of pain,” Dungy said. The lessons learned from Jordan, Tony Dungy said, are many.

“Cookies are good,” Dungy said, “but in Jordan’s mind, if they’re good out on the plate, they’re even better in the oven. He will go right in the oven when my wife’s not looking, reach in, take the rack out, take the pan out, burn his hands and eat the cookies and burn his tongue and never feel it. He doesn’t know that’s bad for him.”

Jordan, Dungy said, “has no fear of anything, so we constantly have to watch him.”

“You get the question all the time, ‘Why does the Lord allow pain in your life? Why do bad things happen to good people? I f God is a God of love, why does he allow these hurtful things to happen?”’ Dungy said. “We’ve learned that a lot of times because of that pain, that little temporary pain, you learn what’s harmful. You learn to fear the right things.”

“Sometimes, pain is the only way that will turn us as kids back to the Father.”

Finally, he spoke of James.

James Dungy, Tony Dungy’s oldest son, died three days before Christmas. As he did while delivering James’ eulogy in December, Dungy on Saturday spoke of him eloquently and steadily, speaking of lessons learned and of the positives taken from experience.

“It was tough, and it was very, very painful, but as painful as it was, there were some good things that came out of it,” Dungy said.

Dungy spoke at the funeral of regretting not hugging James the last time he saw him, on Thanksgiving of last year. “I met a guy the next day after the funeral,” Dungy said. “He said, ‘I was there. I heard you talking. I took off work today. I called my son. I told him I was taking him to the movies. We’re going to spend some time and go to dinner.’ That was a real, real blessing to me.”

Dungy said he has gotten many letters since James’ death relaying similar messages.

Dungy also said some of James’ organs were donated through donors programs.

“We got a letter back two weeks ago that two people had received his corneas, and now they can see,” Dungy said. “That’s been a tremendous blessing.”

Dungy also said he received a letter from a girl from the family’s church in Tampa. She had known James for many years, Dungy said. She went to the funeral because she knew James.

“When I saw what happened at funeral, and your family and the celebration and how it was handled, that was the first time I realized there had to be a God,” Dungy said the girl wrote. “I accepted Christ into my life and my life’s been different since that day.”

Added Dungy, “That was an awesome blessing, so all of those things kind of made me realize what God’s love is all about.”

Dungy also said he was asked often how he was able to return to the Colts so quickly after James’ death. James died on December 22, and Dungy returned to the team one week later. Dungy said the answer was simple.

“People asked me, ‘How did you recover so quickly?”’ Dungy said. “I’m not totally recovered. I don’t know that I ever will be. It’s still very, very painful, but I was able to come back because of something one of my good Christian friends said to me after the funeral.”

“He said, ‘You know James accepted Christ into his heart, so you know he’s in heaven, right?’ I said, ‘Right, I know that.’ He said, ‘So, with all you know about heaven, if you had the power to bring him back now, would you?’ When I thought about it, I said, ‘No, I wouldn’t. I would not want him back with what I know about heaven.'”

“That’s what helped me through the grieving process. Because of Christ’s spirit in me, I had that confidence that James is there, at peace with the Lord, and I have the peace of mind in the midst of something that’s very, very painful.”

“That’s my prayer today, that everyone in this room would know the same thing.”

Previous Life In A Manure Pile
Next What does Love mean?