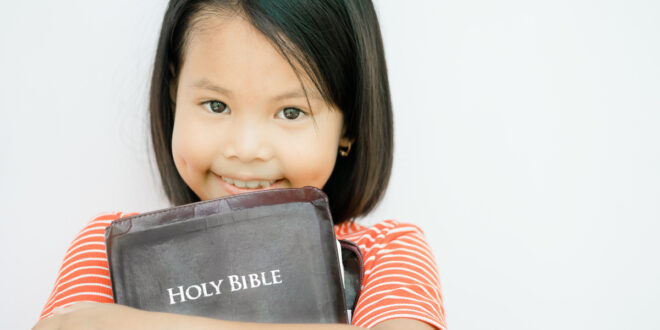 The Bible through the eyes of a child

A child was asked to write a book report on the entire Bible. This is amazing and brought tears of laughter to my eyes.

In the beginning, which occurred near the start, there was nothing but God, darkness, and some gas. The Bible says, the Lord thy God is one, but I think He must be a lot older than that.

Anyway, God said, ‘Give me a light!’ and someone did. Then God made the world.

He split the Adam and made Eve.  Adam and Eve were naked, but they weren’t embarrassed because mirrors hadn’t been invented yet.

Adam and Eve had a son, Cain, who hated his brother as long as he was Abel.

Pretty soon all of the early people died off, except for Methuselah, who lived to be like a million or something.

One of the next important people was Noah, who was a good guy, but one of his kids was kind of a Ham.  Noah built a large boat and put his family and some animals on it. He asked some other people to join him, but they said they would have to take a rain check.

After Noah came Abraham, Isaac, and Jacob.  Jacob was more famous than his brother, Esau, because Esau sold Jacob his birthmark in exchange for some pot roast.  Jacob had a son named Joseph who wore a really loud sports coat.

Another important Bible guy is Moses, whose real name was Charlton Heston.  Moses led the Israel Lights out of Egypt and away from the evil Pharaoh after God sent ten plagues on Pharaoh’s people.  These plagues included frogs, mice, lice, bowels, and no cable.

God fed the Israel Lights every day with manicotti. Then he gave them His Top Ten Commandments.

These include: don’t lie, cheat, smoke, dance, or covet your neighbor’s stuff.

Oh, yeah, I just thought of one more: Humor thy father and thy mother.

One of Moses’ best helpers was Joshua who was the first Bible guy to use spies. Joshua fought the battle of Geritol and the fence fell over on the town.

After Joshua came David. He got to be king by killing a giant with a slingshot. He had a son named Solomon who had about 300 wives and 500 porcupines. My teacher says he was wise, but that doesn’t sound very wise to me.

After Solomon there were a bunch of major league prophets.

One of these was Jonah, who was swallowed by a big whale and then barfed up on the shore. There were also some minor league prophets, but I guess we don’t have to worry about them.

After the Old Testament came the New Testament.  Jesus is the star of The New. He was born in Bethlehem in a barn. (I wish I had been born in a barn too, because my mom is always saying to me, ‘Close the door! Were you born in a barn?’ It would be nice to say, ‘As a matter of fact, I was.’)

During His life, Jesus had many arguments with sinners like the Pharisees and the Democrats.

Jesus also had twelve opossums. The worst one was Judas Asparagus. Judas was so evil that they named a terrible vegetable after him.

Jesus was a great man. He healed many leopards and even preached to some Germans on the Mount.

But the Democrats and all those guys put Jesus on trial before Pontius the Pilot.  Pilot didn’t stick up for Jesus.  He just washed his hands instead.

Anyways, Jesus died for our sins, then came back to life again.

He went up to Heaven but will be back at the end of the Aluminum. His return is foretold in the book of Revolution.

User Rating: Be the first one !
Share
Previous Monkey Business
Next Lipstick in School