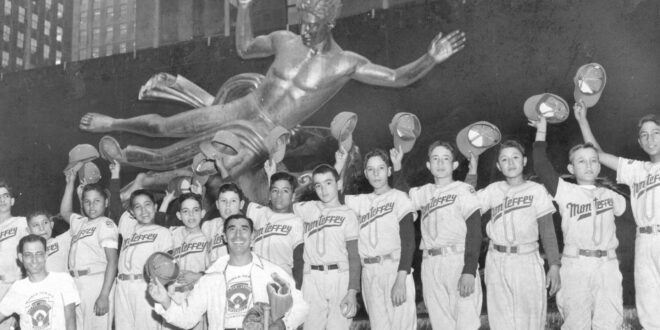 The team was composed of mostly poor kids from an industrial city who’d started playing baseball only a few years earlier, clearing rocks and glass from a dirt field and playing barefoot with a homemade ball and gloves. They’d only imagined Major League games, gathering around a radio for Sunday rebroadcasts in Spanish of Brooklyn Dodgers contests (Roy Campanella, the Dodgers’ catcher had played in Monterrey in 1942 and 1943, enchanting their parents). Even when they reached the Little League World Series, most of their opponents outweighed them by 35 or 40 pounds. But over four weeks and 13 games beginning in July, they were magical.

On August 23, 1957, behind the pitching wizardry of Angel Macias, they defeated La Mesa, California, 4-0, before 10,000 people in Williamsport, Pennsylvania, to become the first team from outside the United States to win the Little League World Series. That day, Macias pitched what remains the only perfect game in a Little League World Series final, setting down all 18 batters in order – Little League games are only six innings, striking out 11 with pinpoint control, nasty breaking balls and sheer guile. La Mesa didn’t hit a ball to the outfield.

“I think the magnitude of the upset, to me, rivals, if not exceeds, when our U.S. hockey amateurs in 1980 beat the Red Army team at the Olympics,” says W. William Winokur, who penned a book and screenplay based on the team’s story. The movie, “The Perfect Game,” stars Jake T. Austin, Ryan Ochoa and Cheech Marin and opens in theaters this month.

The Monterrey team arrived in Williamsport after an unlikely road trip that started when the players crossed the border on foot, taking a bridge over the Rio Grande from Reynosa towards McAllen, Texas, hoping for rides to a small hotel before their first game of the championship tournament. Monterrey had been granted a Little League franchise with four teams only the year before. They expected to lose and return home.

“We didn’t even know Williamsport existed,” remembers Jose “Pepe” Maiz, a pitcher and outfielder on the team who now runs a Monterrey construction company and owns the Sultanes, a Mexican League baseball team. “We were just [supposed] to play a game in McAllen.”

They won their first game in McAllen 9-2 against a team from Mexico City filled with players who were the sons of Americans working south of the border. They swept through the rest of the regional and state tournaments, winning by at least five runs, until they reached the state semifinal game in Fort Worth against Houston. There, Maiz came on as a relief pitcher in extra innings to lead them to a 6-4 comeback win.

Along the way, their visas expired. Only intervention by the U.S. ambassador to Mexico kept them in the country. They were homesick; only Maiz had ever left Monterrey. They often didn’t have money for food, settling for two meals a day. They ate through the kindness of strangers and new friends, who offered them meals in a restaurant or gave them a few dollars after a victory, Maiz says.

Despite the challenges, they kept winning, 11-2 in the Texas state championship, and then 13-0 over Biloxi, Mississippi, and 3-0 over Owensboro, Kentucky, in the Southern Regional Championship, earning the 14 players a bus ride to Williamsport.

Teams from Canada and Mexico had made it to the Little League World Series before, but they’d never won. International competition was still so new that the Monterrey team played in the Texas state tournament and advanced through the U.S. South region.

Little League officials in Williamsport gave them new uniforms with “South” across the chest, emblematic of their regional championship. None of them fit; the Monterrey boys were too small. They averaged 4 feet 11 inches and 92 pounds while the La Mesa team averaged 5 feet 4 inches,and 127 pounds. After he watched La Mesa handily defeat Escanaba, Michigan, in the semifinal, Maiz was worried. Joe McKirahan, La Mesa’s star southpaw pitched a one-hitter and socked two homers, one a towering drive to right field.

“I say to myself, ‘Wow, what will happen to us tomorrow?’ “ he recalls.

Angel Macias, number 8, was 5 feet and 88 pounds, a rare ambidextrous player. This day, he decided to throw only right-handed. Lew Riley, his opponent on the mound, led off for La Mesa, drilling the first pitch down the first base line. “It was just foul by an inch,” recalls Riley, who now lives in Yorba Linda, California. “That was as close as we’d come to a hit.”

McKirahan, who batted cleanup for La Mesa and was later signed by the Boston Red Sox, struck out both times against Macias. “My recollection of Angel during the game was he was sneaky fast,” he says. “He was the first pitcher we saw who clearly had pinpoint control. Even at 12 [years old], you sensed this kid knew exactly where the ball was going. He just dominated us like no one else had come even close to.”

Richard Gowins, an outfielder, didn’t get in the game for La Mesa, but he watched Macias plow down one batter after another from his spot as first base coach. As the game went on, the crowd shifted, backing the boys from south of the border. “They were fast. They were upbeat. They just had a spirit about them,” he says.

Riley was cruising along himself until the fifth inning. The first Monterrey batter walked on four pitches. The second bunted perfectly between Riley and the third baseman, putting runners on first and second with no outs. Maiz came to bat. He saw a fastball from Riley, drilling it into centerfield for a double that scored the game’s first run. In the inning, Monterrey sent nine batters to the plate and scored four times, leaving La Mesa one last chance.

With two outs in the sixth and final inning, Macias threw three balls, then came back with two strikes to La Mesa’s Byron Haggard. For the next pitch, he reached back for a curveball. Haggard swung and missed. The crowd in Williamsport exploded. So did those listening to the radio broadcast in Monterrey.

Fifty-two years later, their victory remains the only perfect game in a Little League World Series Championship. After the celebration, Maiz says the team’s first thoughts were to go home. That would take nearly a month. The Monterrey players traveled by bus to New York to see a Dodgers game and go shopping with $40 each (given to them by Macy’s). Then, they made stops in Washington, D.C. to meet President Dwight Eisenhower and Vice President Richard Nixon before going on to celebrations in Mexico City. When they finally returned to Monterrey, they were met by hundreds of thousands in the streets.

Each earned a high school and college scholarship from the Mexican government although Maiz says only he and one other went to college. Angel Macias was signed by the Los Angeles Angels and invited to their first spring training in 1961 as a 16-year-old. He played briefly for the Angels in the minor leagues before going on to a career in the Mexican League.

“All the doors opened and everywhere we went somebody would point us out or want an autograph,” Macias told an interviewer a few years ago. “People knew our names, and my name was Angel Macias, champion child.”

In 1957, Mexico’s scrawny players overcame the odds to become the first foreign team to win the Little League World Series. They came to be known as “Los pequeños gigantes,” the little giants. See a 7-minute video at YouTube here: www.youtube.com/watch?v=T204CPP4bA0