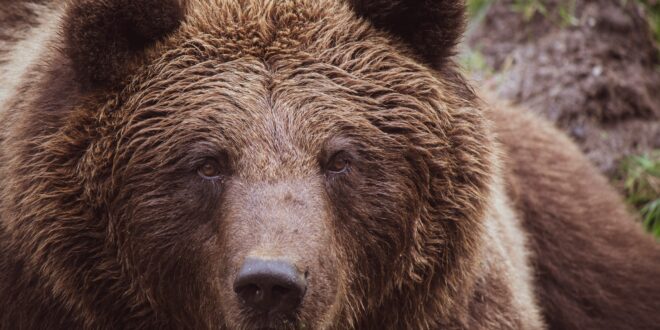 A Russian scientist and a Czech scientist had spent their lives studying the grizzly bear. Each year they petitioned their respective governments to allow them to go to Yellowstone to study the bears.

Finally their request was granted and they immediately flew to New York and on west to Yellowstone Park. They reported to the ranger station and were told that it was the grizzly mating season and it was too dangerous to go out and study the animals. They pleaded that this was their only chance and finally the ranger relented.

The Russian and the Czech were given portable phones and told to report in every day. For several days they called in, and then nothing was heard from the two scientists. The rangers mounted a search party and found the camp completely ravaged, with no sign of the missing men.

They followed the trail of a male and a female bear. They found the female and decided they must kill the animal to find out if she had eaten the scientists because they feared an international incident. They killed the female animal and opened the stomach to find the remains of the Russian. One ranger turned to the other and said: “You know what this means, don’t you?”

The other ranger responded: “Of course…The Czech is in the male.”

One day in the jungle a chimpanzee invented some tools to eat his dinner. One tool was a flat stick sharpened along one edge, this he used to cut his food. The other was a stick with four smaller sticks attached to the end each sharpened to a point. He used to spear his food and place it in his mouth. The chimp was very proud of his inventions which he called his one point tool and his four point tool.

One day he awoke to find that the four point tool was missing. The chimp was distraught. He ran around the jungle trying to find his precious tool. First he came upon the lion. ”Lion, Lion!” he cried, “Have you seen my four point tool?”

”No” replied the lion, “I have not seen your four point tool.”

Then the chimp came upon the gorilla. ”Gorilla, Gorilla!” he cried, “Have you seen my four point tool?”

”No” replied the gorilla, “I have not seen your four point tool.”

Then the chimp came upon the jaguar. ”Jaguar, Jaguar!” he cried, “Have you seen my four point tool?”

”Well where is it?” inquired the chimp.

”I ate it” said the jaguar, smugly.

”Why would you do that?” cried the chimp.

A man was driving along the motorway when he saw two penguins standing in the hard shoulder. They looked lost, so he picked them up and put them in the back seat of his car. He then goes to the petrol station to fill up and whilst he is there the attendant notices the penguins in the back seat.

He says to the man, “What are those two penguins doing in the back of your car?”

The man says, “I found them on the road and they looked lost, so I picked them up”

“You should take them to the zoo,” replied the attendant.

“What a good idea,” said the man, and then paid for his petrol and drove off.

The next day he went to the same petrol station and the same attendant serves him and notices the penguins are still in the car. He says to the man, “I thought I told you to take them to the zoo?”

The man replies, “I did… they loved it… and now I’m going to take them to the movies!”

Two cows were standing next to each other in a field.

Daisy said to Dolly: “I was artificially inseminated this morning.”

“I don’t believe you,” said Dolly.

Bugs Bunny was shopping at the supermarket and a sales assistant said to him: “If you can tell me what 19,866 times 10,543 is, we’ll give you free carrots for life.”

The sales assistant was astonished and asked: “How on earth did you do that?”

Bugs replied: “If there’s one thing rabbits are good at, it’s multiplying.”

Da Cajun, his name Jean Paul, moved to Arkansas and bought him a donkey from an old farmer for $100. Da farmer agreed to deliver da donkey da next day. Da next day, dat farmer drove up and said, “I’m Sorry, but I have some bad news… the donkey died just last night.”

“I can’t do that Sir, I went and spent it already.”

“What are you gonna do with dat dead donkey?”

“I’m going to raffle him off.”

“You can’t raffle off a dead donkey, you dumb Cajun!”

“Well dats where you wrong. You watch you an you learn how we Cajuns so smart!”

A month later the farmer met up with the Cajun and asked, “What happened with dat dead donkey?”

“Just dat guy who won. So, I gave him his two dollars back.”

Little Nancy was in the garden filling in a hole when her neighbor peered over the fence.  Interested in what the youngster was up to, he asked in his friendliest way, “What are you up to, Nancy?”

“My goldfish died,” replied Nancy tearfully, without looking up, “and I’ve just buried him.”

The neighbor commented, “That’s an awfully big hole for a goldfish, isn’t it?”

Nancy patted down the last heap of earth and then replied…
“That’s because he’s inside your lousy cat.”

A rich man was trying to find his daughter a birthday gift when he saw a poor man with a beautiful white horse.  He told the man that he would give him $500 for the horse.

The poor man replied, “I don’t know mister, it don’t look so good,” and walked away.

The next day the rich man came back and offered the poor man $1000 for the horse.

The poor man said, “I don’t know mister, it don’t look so good.”

The rich man’s daughter loved her present.  She climbed onto the horse, then galloped right into a tree.

The rich man rushed back over to the poor man’s house, demanding an explanation for the horse’s blindness.

The poor man replied, “I told you… it don’t look so good.”

Two friends were walking through the woods when they thought they heard something. They turned around and saw a big black bear coming towards them. Both men started to run when one of them stopped to change into tennis shoes.

The second man said ‘You don’t have time to change shoes. You can’t outrun that bear!’

The first man said, ‘I know I can’t outrun the bear. I only have to outrun you!