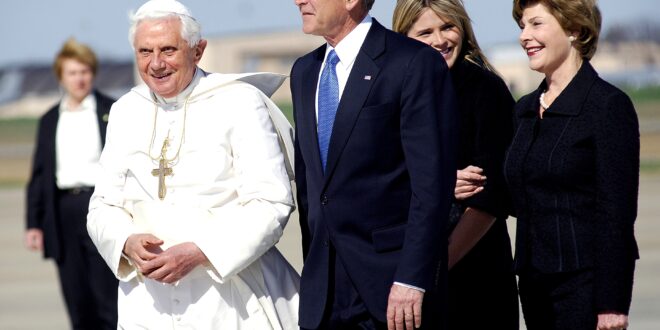 WASHINGTON – After President Bush met with Macedonian President Boris Trajkovski in the White House this month, Bush invited his guest into his private study. There, the two men knelt side by side in silent prayer.

White House aides didn’t mention that devotional interlude when they described Trajkovski’s visit May 2 to reporters, and they were displeased to learn that the private moment was about to become public.

Religion infuses the president’s daily life. Bush, 54, starts every day on his knees, praying. He reads the Bible each morning and studies a daily Bible lesson. He often asks a Cabinet secretary to lead a prayer at the beginning of Cabinet meetings. He says he frequently prays in the Oval Office. He sometimes prays on the phone with a minister friend who lives in Houston.

Bush’s family, friends and longtime aides say faith helped him quit drinking, find his vocation in politics and check his fiery temper. He says it has made him more humble and tolerant.

“I find great comfort in my faith,” he told Fox News last month. “It helps me realize that I am a person that has a lot of responsibility, but I am just a person – nothing more than a human being who seeks redemption, solace and strength through something greater than me.”

Overt expressions of faith by elected leaders can make some Americans uncomfortable. Some employees at the Justice Department say the daily prayer sessions there, led by Attorney General John Ashcroft, make them feel they might be expected to participate. Bush’s appeals to the religious right during his campaign made some people wary of his links to groups such as the Christian Coalition and their socially conservative agenda.

“Americans want a president to have a private, individual faith,” says Philip Goff, director of the Center for the Study of Religion and American Culture at Indiana University-Purdue University in Indianapolis. “What most Americans are uncomfortable with is the institutions of church and state overlapping.”

Religion has been central to Bush’s life since 1985, when he had a pivotal conversation with Rev. Billy Graham. At the time, Bush was in his late 30s, hard-partying and unfocused. He did not take his religion seriously. Graham questioned him about his commitment to his faith, Bush wrote in his autobiography, A Charge to Keep, and “planted the seed of faith in my heart. … It was the beginning of a new walk where I would recommit my heart to Jesus Christ.”

He was raised an Episcopalian but became a Methodist when he got married and joined the church of his wife, Laura. He spoke of his beliefs often during the campaign and said at his inauguration, “We are guided by a power larger than ourselves who creates us equal in his image.”

Bush isn’t reluctant to describe his active faith. “I pray all the time,” he said in the Fox News interview. “When I am alone in the Oval Office (and) something might be on my mind … I will pray. I don’t think that I could be sitting here as comfortable as I am and as peaceful as I am had it not been for my religion.”

Bush’s prayers in the Oval Office are usually solitary. But Trajkovski, like Bush, is a Methodist. The Macedonian president is also a lay minister. Before the visit, Trajkovski’s staff suggested to White House aides that he would welcome a chance to pray with Bush. When Trajkovski entered the Oval Office for the formal meeting, Bush recognized a pin on his lapel. It was the emblem of the United Methodist Church, a cross and a flame signifying the Holy Spirit. After their official conversation, Bush invited Trajkovski to join him in prayer.

Bush’s frequent references to God and his faith make Barry Lynn, executive director of Americans United for Separation of Church and State, cringe. “When a president wears his religion on his sleeve as visibly as this one does … he isn’t simply using the bully pulpit to speak his mind,” Lynn says. “He’s trying to impose his religious views on other people.”

Some critics thought Bush exploited religion during the primary-election campaign. To build support among traditional Republican voters before a hard-fought South Carolina primary, he visited Bob Jones University, an evangelical school in Greenville that banned interracial dating and whose founder called Catholicism a cult. Another time, in a debate, he was asked what political philosopher or thinker he most identified with. He answered simply, “Christ, because he changed my heart.”

Since taking office, Bush has met often with clerics, including Catholic bishops and African-American ministers, at the White House and while traveling. When U.S. military personnel were being detained in China last month, he asked American officials to be sure they had Bibles if they wanted them. He has proposed that religious groups operate some federal programs for the needy.

“Jesus says, ‘Keep your piety in private,’ ” says Martin Marty, a religious historian. “People like the notion that piety shapes a president’s morality … but they know that policies backed by religion have to be scrutinized more than others.”

Kirbyjon Caldwell is senior pastor at Windsor Village United Methodist Church in Houston and a Bush friend who sometimes prays with the president over the phone. Caldwell says Bush’s faith is such a significant part of his life that he can’t help but talk about it.

“The president’s faith is extraordinarily important to him, not just for spiritual reasons but for professional, emotional, social and family reasons,” Caldwell says. “The president allows his faith to permeate his entire being. He does not keep his faith in a box and open it when he’s in trouble.”

However, he doesn’t impose it on anybody, his aides say. They see his expressions of faith as one key to his character. “I find it very welcoming,” says press secretary Ari Fleischer, who is Jewish. “It’s a reminder for everyone about the importance of faith in our lives, and the president practices his so powerfully and so privately that it serves as a simple reminder of the American tradition of having a strong faith.”

Bush often attends church on Sundays, including services in the chapel at Camp David, Md., the presidential retreat, but he has not joined a church in Washington.

Other presidents have had deep religious convictions. During his presidency, Jimmy Carter, a Baptist, taught Sunday school. Richard Nixon, a Quaker, invited evangelists to the White House. Abraham Lincoln never joined a church but rarely gave a speech without references to God. Bill Clinton, a Baptist, recited lengthy Bible passages from memory. John Adams, a Unitarian, studied for the ministry before becoming a lawyer.

Bush has said he doesn’t think of himself as an advocate for his religion, but he doesn’t intend to hide his faith.

“I am… a lowly sinner who sought redemption and found it,” he told USA TODAY in January. “That doesn’t make me better than anybody, it just adds perspective, I hope. I think people are going to find that in tough times… they’re going to see a steady hand because the rock on which I stand is something other than the moment, the emotion of the day. Faith can be a steadying influence.”

Previous The Geese and the Snowstorm
Next Explain God