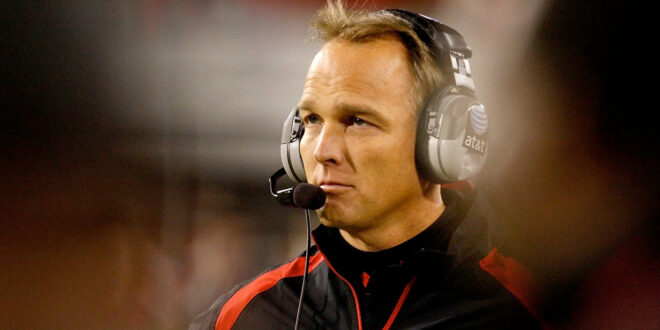 Athens — Mark Richt has won five games and is on his second honeymoon. Predisposed to like any new coach, Georgia fans have swooned over this one.

At Bulldog Club meetings over the summer, Loran Smith introduced Richt by saying, “The only problem with Mark is that I can’t find anything wrong with him.” As the Bulldogs prepare for their annual unpleasantries against Florida in Jacksonville, Richt’s constituency is still looking.

“He doesn’t have any hangups,” says Smith, executive secretary of the Georgia Bulldog Clubs and Larry Munson’s venerable radio sidekick. “He’s so nice. All he wants to do is coach football and spend time with his family.”

“He represents us off the field in a way the alumni can feel good about,” says school president Michael Adams, who made the decision that Georgia needed a new coach. “He espouses values that everyone is comfortable with. He’s exceeding my expectations.”

“He’s extraordinary,” says Don Leebern Jr., the chairman of Georgia Crown Distributing and an influential member of the school’s Board of Regents. “He hasn’t been received — he’s been embraced.”

Such is the affection for Richt, a head coach for the first time in his life, that he was forgiven for the kind of tactical mistake that would have been draped around the neck of Jim Donnan, his unloved and unlovable predecessor. In Richt’s second game, the Bulldogs were called for two late penalties inside South Carolina’s 10-yard line. Georgia settled for a go-ahead field goal and was undone by a subsequent Carolina touchdown.

Richt took the blame for the penalties and the loss. Four weeks later, he presided over the victory that made Bulldog fans forget Carolina, forget Donnan and Ray Goff, forget the dozen mostly frustrating seasons that have passed since Vince Dooley retired as coach.

Tennessee scored what seemed the winning touchdown with 44 seconds to play. It would have marked another in a series of excruciating losses to the high-profile Volunteers. But the Bulldogs moved downfield with dispatch and scored with five seconds remaining on a deft and delicious play — a fake handoff followed by a short pass to Verron Haynes, the ridiculously uncovered fullback — that affixed Richt’s star in the Red & Black firmament.

“To be successful,” says Dooley, still Georgia’s athletics director, “you have to beat the teams you’re supposed to beat and then, every so often, beat somebody you’re not. We hadn’t won a game on the road like that in . . . well, in a long, long time.”

Beating the hated Volunteers lifted Richt from being liked to being virtually beloved. “Everybody wants to support any new coach,” Dooley says. “That’s just the nature of things. But that game might have elevated and extended Mark’s honeymoon.”

“That game raised what was already a high level of confidence,” Adams said. “Now you hear people saying that the guy can really coach and that he’s cool under fire. It used to be said of Vince that he was wise beyond his years; now I think many people are saying the same about Mark Richt.”

And what does Mark Richt say about the hullabaloo he has stirred? Not much. He doesn’t read the newspaper, he says, doesn’t watch the news. “I’m here,” he says, sitting in his office. “I’m in my own little world.”

Lots of coaches crave lots of adulation. Richt seems conscious of the peripheral without being immersed in it. Before Georgia’s opener against Arkansas State, he took the “Dawg Walk” with his players, marching into Sanford Stadium through the adoring throng gathered outside. He hasn’t done that since and won’t again. “I don’t like getting emotional before games,” he says. “That’s for the players.”

Richt, 41, speaks often of being “at peace.” He’s a born-again Christian and will say so without prompting. “When I go to work I have responsibilities to Coach Dooley and President Adams, but I’m really working to please God. If I know all my motives are pure, I can be at peace.”

If Richt is unmoved by sudden success, it’s because he felt the back of the same fickle hand 20 years ago. He was a quarterback at the University of Miami, a hot prospect from chic Boca Raton. He figured he’d start as a freshman and win the Heisman Trophy as a junior. Then Jim Kelly showed up — another quarterback, a better quarterback — and Richt’s little world collapsed.

He played behind Kelly, which meant he played little. Richt tried to act as if he didn’t care, which only underscored how much he did. His grades sagged. He was suspended briefly from the team. Did he ever get arrested? “No,” he says. “But I should have.”

Having figured football and its accompanying pats on the back were all there was to life, Richt was staggered to see how flimsy that foundation had been. He began casting around, looking for something more, and he noticed an older guy — a Miami free safety against whom Richt had played some fierce pinball in the rec room — who seemed to have a handle.

The free safety’s name was John Peasley. He was a Christian, and Richt remembers admiring him without ever saying so. “He was a peaceful guy, a good guy to be around. I thought to myself, ‘That’s what I need.’ ”

Focus on the next play

It wasn’t until 1986, when Richt was a graduate assistant at Florida State, that he made the full conversion. An offensive lineman had been killed, and Bobby Bowden, the FSU coach, asked his assistants if they knew where they’d spend eternity. Richt credits Bowden with bringing him to Christ, but the seed had been sown in Miami, sown by a free safety.

Not long ago, Richt told that story to an audience — “Giving my testimony,” as he says — and a listener asked the follow-up question: Where’s John Peasley now? Richt was embarrassed to say he didn’t know, but he endeavored to find out. And so it was that Peasley, who sells advertising and lives in Alpharetta, received a phone call this summer from the new Georgia coach. Peasley had no idea he’d been of any influence.

“It was nice of him to say,” Peasley says. “I remember Mark very well. You saw the leadership skills even then.”

You saw them on the sideline in that frantic final minute at Tennessee. Watch the tape and you’ll note that Richt doesn’t change expression after Haynes scores. You’ll note that, with players exulting all around him, Richt has already moved on. “He was figuring out what to do with the extra point,” says Dave Van Halanger, Georgia’s strength coach. “Should we kick and take the chance of them blocking it and returning it to tie the game? [Fearing just that, the Bulldogs wound up doing nothing.] That comes from having been an offensive coordinator: You’re always thinking, ‘What’s the next play?’ ”

Van Halanger is often identified as Richt’s best friend. The two worked together for 15 years at Florida State. They run a few times a week, three miles up and down Lumpkin Street at what Van Halanger calls “conversational pace.” They talk mostly about family, but sometimes Richt will gaze around him and say, “Boy, isn’t this a great place?”

There were times when Donnan, who won 67 percent of his game but was roasted on his own call-in show and excoriated on the Internet, wondered if Georgia fans weren’t the most vicious in the country. But Donnan was a chilly sort, and Donnan could never win in Knoxville. The cool exterior notwithstanding, Richt enjoys people. At Bulldog Club meetings, he signed every autograph and posed for every picture.

Inside Richt’s office, you see no reminders of his successes at Florida State. Instead you see the Georgia logo everywhere. “Georgia football has been here for more than 100 years,” he says. “To think we invented anything would be silly. People are passionate about this team. People have memories. People have bled for this team.”

Above all, people care. Florida State has become a mighty program under Bowden, but it still isn’t the flagship university of its state. To coach the Bulldogs is to be among the half-dozen most recognized figures in Georgia. Van Halanger has come to grasp as much — “When we’re out running, people will see Mark and say, ‘Great game, Coach’ ” — even if the man himself immerses himself in his cocoon of family and football.

This was how Georgia’s ascendant coach celebrated his team’s victory over Kentucky last weekend. He hauled himself out of bed before 4 a.m. Sunday — “I sleep well the night before games, but not the night after,” he says — and drove to campus. Then he graded game film. Then he went home and fixed waffles for his four children and four visiting friends. (“He’s actually a great cook,” says Katharyn Richt, his wife.) Then the crew attended services at Prince Avenue Baptist Church.

He could, Richt allows, report to work every weekday at 6 a.m., but he doesn’t. “I want to be home when the kids go to school,” he says. He reads Bible stories to them before breakfast and goes over spelling words as he carts them to school.

“There’s no doubt we’re where we’re supposed to be,” Katharyn Richt says. “The people here have been wonderful. Sometimes you almost wish things wouldn’t go too well too soon, but I guess that’s OK, too.”

There were times over the winter when Richt wondered if he’d done the right thing. Katharyn Richt grew up in Tallahassee, the daughter of an FSU homecoming queen. “Most coaches work to try and get back home,” Richt says. “We were already there.” And then he wasn’t. His family was still in Florida and he was living in an Athens hotel, and he’d find himself, he says, “face down in the floor of the Holiday Inn, asking God for the strength to go to work.”

He found it then. He finds it now. “It’s easy when you put the focus on other people,” Richt says. “It’s a lot easier to fight for somebody else than to worry about you.”

Richt and Van Halanger brought from Florida State a wicked offseason conditioning vehicle they call “mat drills.” Staged on wrestling mats, the players go through agility training interspersed with bouts of wrestling, and they do it at such speed as to make the ill-conditioned throw up.

Months before the Bulldogs went to Knoxville, their mat drills became their rallying point. “Finish the drill!” became their credo. (“You’ll hear someone say that four or five times at practice tonight,” says center Curt McGill.) And after they drove the length of Neyland Stadium in the span of 39 seconds to score the winning touchdown, that was what the Bulldogs shouted in their joyous locker room: “We finished the drill!”

Mark Richt had waited all his life to become a head coach, turning down the University of Pittsburgh five years ago because he didn’t feel he was ready. He feels ready now. He has the staff he wants, the life he wants. “I never wanted to take a job thinking it would be a steppingstone to something else,” he says. He wanted to make one move, and this was it. He plans to coach Georgia for as long as Georgia people will let him, which could be a good long while. He plans to finish this drill.

Mark Richt on Georgia: “I never wanted to take a job thinking it would be a stepping stone to something else.”

This article is used with permission from writer.