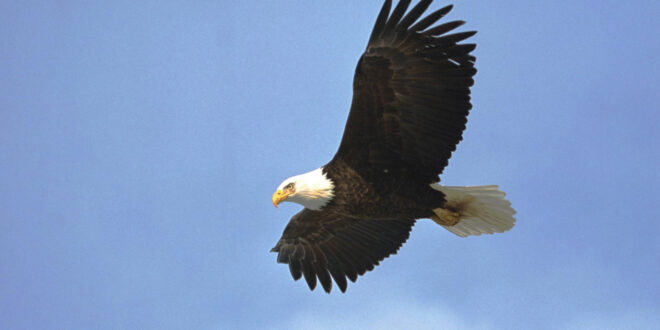 A FABLE from “Walking on Water” By Anthony De Mello, SJ

Once, long ago, an Indian warrior found an eagle’s egg on a mountaintop, and he put it in the nest of a barnyard hen. When the time came, the chicks hatched, and so did the little eagle, who had been kept warm in the same brood.

The tiny eagle grew along with the hatchlings. After some time it learned to cluck and cackle like chickens, to scratch the ground, to look for worms. And he would thrash his wings and fly a few feet into the air onto the lower branches of the bushes, just like all the other chickens.

Years passed and the eagle grew very old. One day he saw a magnificent bird above him in the cloudless sky. Up there in the bright blue, this bird glided with graceful majesty among the wind currents, with scarcely a beat of its strong golden wings.

The old eagle was awestruck. It turned to the nearest chicken and asked, “Who’s that?”

The chicken looked up and answered, “Oh, that’s the golden eagle, the king of the birds. He belongs to the sky. We belong to the earth… we’re chickens.”

So, the eagle lived and died a chicken, for that’s what he thought he was.

“You must be the change you wish to see in the world.”
— Mahatma Gandhi

Previous 1000 Marbles
Next The Sculptor’s Attitude