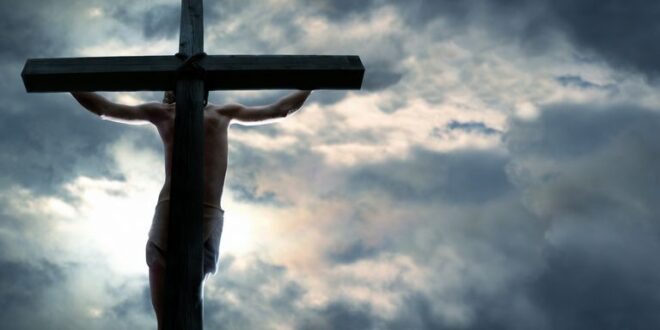 Today is the day that most of Christianity celebrates or remembers in some way as “Good Friday.” It is the day we remember as the day when Jesus was nailed to that old rugged cross about which we sing — there to bleed and die for “the sins of the world.” When we read the Bible’s account of the crucifixion and the brutal events leading up to it; When we see a film such as Mel Gibson’s “The Passion of Christ,” we must pause to ask ourselves, “What’s so GOOD about such a day as that?”

The depravity of mankind, the nature of man to sin, is at both the most unpopular of the Christian doctrines and also the most empirically verifiable. We have within us a basic sense of our desperate condition. We are aware, or are often reminded, that we are not quite what we were intended to be. Something went wrong, something we want to see made right, but somehow find ourselves incapable of restoring.

Ralph Wood, professor of theology and literature at Baylor University, once asked a group of seminary students to compare two scenes. First is an astute, post graduate college student who insists that sin and the fall of man are myths invented by superstitious people. Second is a young pagan in a remote jungle somewhere whom you find in a clearing sacrificing a chicken on a makeshift altar. “Which man is closer to understanding the truth about his own true nature?” he asked. The students debated and discussed the issue for a time but ultimately agreed that the pagan boy, however primitively, understood something the other did not. There is a need in our lives for atonement. There is a need for sacrifice.

For generations it is recorded in the Old Testament how the Israelites labored to follow laws that were meant to atone for their sin and restore them to a right standing in the presence of God. “And you shall provide a lamb a year old without blemish for a burnt offering to the LORD daily; morning by morning you shall provide it” (Ezekiel 46:13). The language of sacrifice and offering was found throughout Near Eastern culture. But the blood of Israel’s sacrifices was not like the blood shed by those attempting to appease and approach the gods they feared and followed. The prophets sent throughout Israel’s history were forever insisting that God wanted more than the empty performance of sacrifice. He desired the offerings to exemplify the heart of a worshiper, one yearning to be in the presence of Him who created us, drawing nearer through the blood of a spotless lamb.

When Scriptures speak of Christ as the Lamb of God, it is easy to see the symbolism. Each time we read of the lamb or the lion in Scripture, it is easy to move through the text with an instantaneous recognition: The lamb is Christ. The lion is Christ. But Oxford scholar John Lennox reminds us that these passages tell us not only who it is, but what it is. It’s Christ as the lamb, the spotless lamb who died in my place. The description moves well beyond symbolism. He is the Lamb whose blood atones my depravity, the Lamb who moves me forever into the presence of God. “For God so loved the world the He GAVE His only Son, that whoever believes in Him will not perish but have eternal life.” (John 3:16) God provided His own lamb of sacrifice to bring us to Himself. And that Lamb gave Himself for us on Good Friday.

When John describes his vision of heaven in the book of Revelation, the Lamb is found in the center of a singing multitude. “Then I saw a Lamb, looking as if it had been slain, standing in the center of the throne, encircled by the four living creatures and the elders” (Rev. 5:6). Asks Lennox, “But how can a slain lamb stand?” On this Good Friday, it is an image that challenges our hearts and minds. The Lamb who bore my sins, forever bears the scars of my atonement, even as he stands … alive forevermore, in Heaven.

As the Lamb, Christ has met, fulfilled and satisfied a need we could not. He has become the sacrifice we could not give. He is the Lamb who was slain so that we could bow and sing in the presence of God. There is a hymn that declares the glory of Christ, the only one who is worthy:

Behold the Lamb of God!
Into the sacred flood
Of Thy most precious blood
My soul I cast:
Wash me and make me clean within,
And keep me pure from every sin,
Till this life be past.

Behold the Lamb of God! The Lion of the Tribe of Judah, the Cornerstone, the Shepherd, our Advocate has bowed to death and overcome. The Slain Lamb stands. That’s what is GOOD about Good Friday.

Previous Pine Tree Crosses
Next He Is Risen