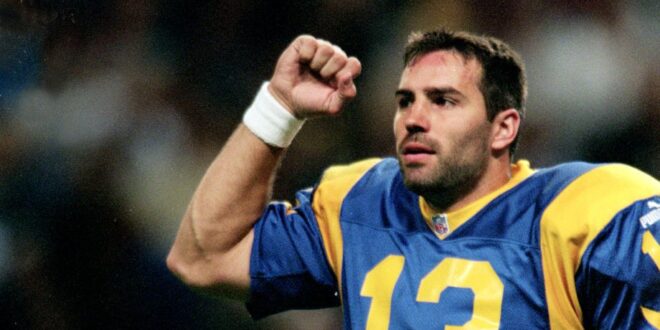 Kurt Warner’s tale was written back in 1999, when he defied the odds by emerging from obscurity to lead the St. Louis Rams to a victory in Super Bowl XXXIV. In that same year, Warner was named the NFL and Super Bowl Most Valuable Player and stood out as the spiritual leader of the Championship team. For the next two years Kurt continued to be a dominant force in the NFL, leading the Rams to two additional playoff appearances – including another Super Bowl – and receiving Pro Bowl honors for three consecutive years (1999-2001).

Warner holds the Super Bowl record for most career passing yards with 1,156 and notched the top three passing performances in Super Bowl history. He is also one of a few NFL players to be recognized with two NFL MVP awards, receiving his second after the 2001 season. Check out this highlight video from Kurt’s first NFL season – GO HERE >

Warner experienced a renaissance in 2008 with the Arizona Cardinals as he led the franchise to their first ever Super Bowl berth. He was voted to his fourth Pro Bowl, and received the prestigious Walter Payton NFL Man of the Year Award. Surpassing several Cardinals’ franchise records including touchdowns, attempts, completions, completion percentage and passer rating, Warner once again captured the imagination of the sports world with his dignity, class and undeniable faith.

Kurt Warner was born and raised in Iowa. He played college football at Northern Iowa, graduating with a degree in communications. Kurt’s journey to NFL stardom was unconventional. Cut by the Green Bay Packers after the 1994 training camp, Kurt played for the Iowa Barnstormers of the Arena Football League from 1995-1997 where he earned all-Arena honors.

The Rams signed Warner in December 1997 and assigned him to the Amsterdam Admirals of NFL Europe in 1998. He made the Rams roster that season as the third-string quarterback and saw his first NFL action in the fourth quarter of the Rams final game of the season. A season-ending injury to the Rams’ starter in a pre-season game thrust Kurt into the spotlight for the 1999 season where he went on to excel as the ringleader of what became known as the “Greatest Show on Turf” until 2002.

After suffering from injuries and watching from the sidelines, Warner was released by the Rams in 2004 and signed a one year contract with the New York Giants. In March 2005, he was signed by the Arizona Cardinals. Again, he took his team to the Super Bowl, after the 2008 season, only to lose to the Pittsburgh Steelers… virtually on the last play of the game, after leading with about two minutes left.

You can learn more about Kurt in this FOX movie about his life – click here!

In 2001, Kurt and his wife Brenda established the First Things First Foundation, a non-profit public charity dedicated to impacting lives by promoting Christian values, sharing experiences and providing opportunities to encourage everyone that all things are possible when people seek to put first things first.

When Kurt was a university student he met his future wife. Brenda was a divorced single mom living on food stamps. In his autobiography “Keep Your Head Up,” Kurt describes his and  Brenda’s first encounter when a teammate at the University of Northern Iowa talked him into going to a country-music club in Cedar Falls, Iowa. There was an instant connection, but Brenda didn’t know whether it would last.

Not only was Brenda a single mom, but one of her two children, her son Zachary, had significant medical problems. He was blinded and brain-injured when accidentally dropped to the floor by her first husband. Kurt was not turned aside by the children or Zachary’s condition and he and Brenda forged a relationship that resulted in their marrying four years later.

Kurt’s celebrated job at a grocery store took place in 1994, after he got a pink-slip from the Green Bay Packers. He returned to Cedar Falls and worked nights stocking shelves for $5.50 an hour.  He rose to fame by throwing an amazing 41 touchdowns for the Rams, bringing them to a 13-3 record and to memorable victory in Super Bowl XXXIV. He’s become known for his commitment to his family, his clean-kid lifestyle, and his Christian faith. He and Brenda now live in St. Louis with their four children Zachary, Kade, Jesse, and Jada Jo. He is the founder of the First Things First Foundation. Learn more about Kurt, his family and his foundation here – www.kurtwarner.org.

User Rating: Be the first one !
Share
Previous FREE 411 from Google
Next Fresh Bread