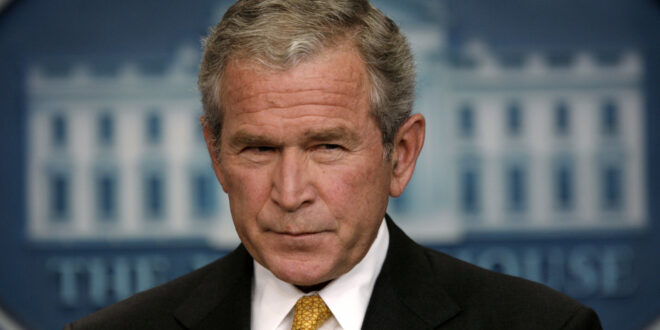 This was the same man who came within a hair’s breadth of losing an election in November, who withstood the political chicanery of the Florida Democratic machine to fix the vote count.

This was the same man who admitted to having a drinking problem in younger years, and whose happy-go-lucky lifestyle led him to mediocre grades in college and an ill-fated oil venture.

This was the same man who mangled syntax even more than his father, and whose speaking missteps became known as “Bushisms.”

And on Friday, this was the man who bore the weight of the world and the responsibilities of a generation with dignity, class, confidence, appropriate solemnity, and even much-needed wit.

One thing struck me during the campaign, that difficult, roller-coaster campaign that now seems years ago. It was that George W. Bush never seemed to get ruffled. Whether the theft of a campaign debate video or the sudden (some would say, vicious) release of a DUI arrest two decades ago at a key moment, “W” did not lose his cool. At times, his staff seemed overconfident, as did many of us. A 350-electoral-vote win, they quietly implied… and we optimistically believed. Then they counted the votes, miscounted others, and re-counted still others. At the end, he was still there. Whereas Al Gore almost frantically huffed and puffed, trying to gin up something out of nothing, Bush quietly but confidently waited at his ranch. He didn’t do nothing: that is the mistake people have constantly made with this man, confusing lack of bluster for absence of action. No, his team of attorneys and the iron-willed James Baker were carrying out his orders, but W stayed in the background, confident and faithful.

You see, it is this “faith business” that confounded everyone. We have had such actors and liars in public office that we have looked skeptically whenever anyone used the term faith. But this was the same man who was the first politician ever in recent memory to name Jesus Christ as the Lord of his life on public TV. Not an oblique reference to being “born-again” or having a “life change.” He said the un-PC-like phrase, “Jesus Christ,” to which his handlers and advisors, no doubt, off stage, were also saying, “Jesus Christ” in a much different tone.

God has a way of honoring those who honor Him. David learned that while he was on the run from Saul’s armies. Job learned that after his time of horrible tribulation. The Messiah said so Himself, many times.

So this was the man who actually put faith into practice. He actually loves those who hate him. It is a staggering concept, so foreign in daily occurrence that few thought it anything but grandstanding. Even one of W’s biggest supporters chided the President for adhering to his “new tone.”

Yet there he was, again and again, thanking the Democrats. Appointing his enemies to high places in his government. Inviting his former foes and their wives to private movie screenings, and (I know, this is hard to stomach) even treating them with dignity. See, this was the man who learned early on how faith worked: by praying for his enemies, you “heap burning coals upon their heads.”

And on September 11, at mid-morning, this was the man thrust into a position only known by Roosevelt, Churchill, Lincoln, and Washington. The weight of the world was on his shoulders, and the responsibility of a generation was on his soul. So this same man – the one that the media repeatedly attempted to tarnish with charges of “illegitimacy,” and the one whose political opponents desperately sought to stonewall until mid-term elections – walked to his seat at the front of the National Cathedral just three days after the two most impressive symbols of American capitalism and prosperity virtually evaporated, along with, perhaps, thousands of Americans.

As he sat down next to his wife, immediately I knew that even if his faith ever faltered, hers didn’t. I have never seen a more peaceful face than Laura Bush, whose eyes seemed as though they were already gazing at the final outcome… not just of this conflict, but of her reward in Heaven itself. In this marriage, you indeed got two for the price of one.

Then came the defining moment of our generation. Some people fondly recall their Woodstock days. Others mark with grim sadness November 22, 1963, as the day America lost her innocence. But I firmly believe when the history of this time is written, it will be acknowledged by friend and foe alike that President George W. Bush came of age in that cathedral and lifted a nation off its knees. It wasn’t so much his words, though read a decade later, they will indeed be as stirring as any. This conflict would end, he noted, “… at a time of our choosing.” It certainly wasn’t his emotion. What had to have been one of the most stunning exhibitions of self-control in presidential history, W was able to deliver his remarks without losing either his resolve or his focus, or, more important, his confidence. It was as if God’s hand, which had guided him through that sliver-thin election, now rested fully on him.

His quiet confidence let our enemies know… and believe me, they know… that they made a grave miscalculation. Now, this same man who practiced his faith through a tough election, who steeled his convictions even more in a drawn-out Florida battle, and who never once gave in to the temptation to get in the gutter with his foes (well, ok, maybe the “Clymer” comment is an exception), this same man now lifted the weight of the world and the responsibility of a generation and put it on his modest shoulders as though it were another unpleasant duty.

As he walked back to his seat, the camera angle was appropriate.

He was virtually alone in the scene, alone in that massive place of God, just him and the Lord. But that’s the way it’s always been in his life recently. In that brief time it took him to return to his seat, I believe he heard words to the effect of, “You can do this, George. I am with you always. And you can do this well, because I am going before you. And don’t worry about the weight. I’ve got it.” And I saw in his eyes a quiet acknowledgment. “I know. Thank you, Lord.”

Back at his seat, when W sat down, George H.W. Bush reached over and took his son’s hand. The elder Bush always struck me as a religious man, but not someone who shared his life on a daily basis with the Lord. George H.W. treats the Father like a respected uncle, visiting Him on appropriate holidays and knowing the relationship is real, but not constant. Anyway, I believe that in that fatherly squeeze George H. W. said, “I wish I could do this for you, son, but I can’t. You have to do this on your own.” George W squeezed back, and gave him that look of peace that Laura had kept throughout. It said, “I don’t have to do it alone, dad. I’ve got help.”

User Rating: Be the first one !
Share
Previous It’s the struggle in life that makes us strong
Next 100+ Years of Fatherhood