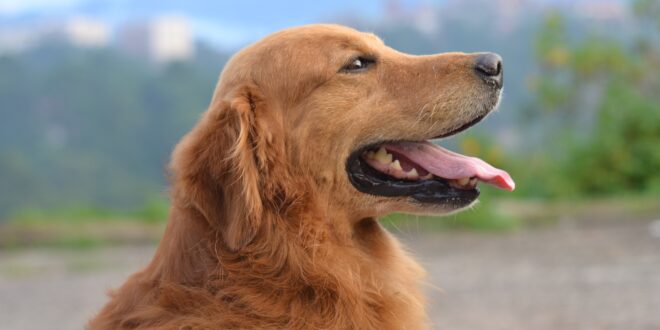 Ripley’s Believe It or Not

This golden retriever has a nose for finding baseballs, even in the afterlife!

The day finally came we had long been dreading.

My husband, Dean, and I knew it was time to say goodbye to our beloved golden retriever, Ripley. The vet was coming over that afternoon. That morning we took him to the park, knowing it was going to be the last time he would ever play ball.

For 13 years, not a day went by we didn’t play ball. Now, I bounced the ball on the pavement in front of the cart Ripley sat on and he weakly tried to catch it in his mouth. The past couple of weeks his breathing had worsened and he gasped for air.

Dean touched my shoulder. “Just a little bit longer,” I said. I knew putting Ripley down was the best choice, but I wasn’t ready. Not yet.

How could I let him go? He’d been with Dean and me almost as long as we’d been married. We didn’t have children, so our dogs became our kids. We moved often for Dean’s work — we’d lived in Castlegar, Kelowna and Vancouver in British Columbia and then in Seattle before coming here to San Jose, California. The dogs were my anchor and helped me feel settled, no matter where we lived.

My parents gave us Ripley as a Christmas present when he was just 10 weeks old, a month after Dean and I got married. His thick downy blond fur, black button nose and chubby stature made him look like a baby polar bear. His huge paws were an indication of the 100-pound adult he would become.

As with all new parents, we showered Ripley with attention. Dean even invented a game. He’d lie down on the floor next to our puppy, toss a tennis ball into the air and Ripley would use Dean’s stomach as a springboard, launching into the air, and catch the ball before it could hit the ground.

I had my own game with Ripley. I sat at the bottom of the stairs while he sat at the top holding a ball in his mouth. He’d let the ball drop and watch fascinated as the ball bounced down the steps one at a time. When it hit the last step, I caught it and tossed it back to him. Each time he caught the ball he gnawed it like it was the first one he had ever seen. He never tired of this game and could play it for hours.

The following Christmas, Dean brought home Holly, a small female golden. The two dogs quickly became inseparable. For each of the dogs’ birthdays, we took them to McDonald’s. We ordered a double cheeseburger meal — a burger for the birthday dog and one for the other so they wouldn’t feel left out. Celebrating a kid’s birthday was one thing, but a dog’s? To me our dogs’ birthdays were just as important.

It wasn’t until shortly after his tenth birthday that we discovered Ripley’s true nose for the ball. Specifically baseballs. Dean and I had just moved from one neighborhood in Seattle to another. Nearby was a large park where we walked every day, with mulched paths, shady trees and plenty of squirrels that Holly loved to chase.

Ripley, however, had other things on his mind besides squirrels. One day his nose caught a scent and he veered into the bushes. “What did you find, Ripley?” I asked. His tail was going round and round like a windmill, so I could tell it had to be something really good. He emerged triumphant with a baseball in his mouth. “Good boy!” I said, kneeling down to give him a hug.

That was just the beginning. There were seven baseball fields at the park and every time we went there, Ripley was on a mission. He’d zigzag in and out of the bushes, under the bleachers and come trotting back with a baseball in his mouth. Sometimes he’d stop in front of a bush, his tail wagging, look at me then stare pointedly back at the bush. That meant he’d located a baseball he couldn’t extract. Even if I couldn’t see it right away, he’d stand there unwavering, as if to say, “I know it’s there.” Sure enough, after digging around on my hands and knees, I’d find a ball tangled in the underbrush.

As Ripley’s collection of baseballs grew, we resorted to collecting them in a trash can in the garage. On average he found one or two a day. His record in one day was 12! I felt like a mom who’d just seen her kid hit a home run.

When the off-season came, however, he seemed sluggish on our walks. I noticed he was dragging one of his hind legs.

The paralysis got worse. Numerous trips to the vet couldn’t diagnose the problem and an MRI came back inconclusive. I bought a back-end harness to hoist up Ripley’s rear as I walked him. Soon it was Little League season again, and even with his disability, Ripley found 150 baseballs. However, I couldn’t keep half-carrying him everywhere we went. I outweighed Ripley by only 12 pounds and my whole body ached from supporting his weight.

“Come on, Ripley,” I snapped one time. “You can walk faster!” Yet when I looked into his eyes, they told me he was doing the best he could. God, I prayed, there’s got to be a better way. Please help Ripley. Help me.

I was out shopping for plants one day and spied a large flat garden cart. That’s it! Perfect for hauling Ripley. I immediately bought one. From the moment we lifted Ripley onto it, he was as happy as a dog let loose in a room full of bacon (or in his case, baseballs). Ripley loved riding in his cart to the park.

When Ripley was 12 years old, Dean got transferred again, to California. Two weeks before we were due to move to San Jose, I felt two lumps on both sides of Ripley’s neck. I took him to the vet and this time there was a diagnosis: lymphoma. The word chilled me. Ripley started chemotherapy.

I took the dogs for walks at the park in San Jose three times a day. Though the park didn’t have any baseball diamonds, I knew Ripley loved being there. We developed a new game where I bounced the tennis ball in front of Ripley’s cart and he’d catch it in his mouth and gnaw on it. I’d walk over and grab the slimy ball from him and toss it back again. I got more exercise than Ripley, but he loved it and that was all that mattered.

Due to Ripley’s condition, we got a lot of attention at the park. “I see you here with your dogs every day and admire your commitment,” one woman said, even offering to help if I ever needed a break. Another woman brought me coffee and a bag of donuts, saying, “It warms my heart how you care for him.” A firefighter even stopped me to tell me how much he appreciated my dedication to my dog.

One summer day a group of women came up to us. “Can we pray with you?” one of them said. In the middle of the park, these strangers encircled Ripley and me and together we prayed. I needed it. The chemo wasn’t working and Ripley was getting worse.

Now, the lymph nodes on either side of his throat were so swollen it was hard for him to breathe. I tried to comfort him as much as I could. Finally, Dean urged me to make the call to the vet. We had this one last morning in the park with Ripley.

I bounced his ball to him for a few more minutes and Ripley played as best he could. Finally, we took him home.

The vet arrived. Dean and I wrapped our arms around Ripley one last time, sobbing as we said our goodbyes. Then our golden boy was gone.

I don’t know how long I’d been crying when Dean suggested we take Holly for a walk. “It’ll be good for us to get out of the house,” he said. Reluctantly, I agreed.

We pulled Ripley’s cart out, the same one he’d sat on just hours earlier. Holly climbed aboard. She glanced from side to side. “Where’s Ripley?” her eyes seemed to ask. Dean and I headed down the street in silence.

We’d just walked into the park when something lying in the grass caught my eye. Something white.

I looked around. There were no ball fields here. There wasn’t even anyone near us. No kids playing catch, no dogs playing fetch. Just Holly, Dean and me.

I picked up the baseball and held it to my heart. I didn’t have to wonder where this ball came from. I knew.

Previous The Pastor’s Cat
Next The Most Beautiful Flower