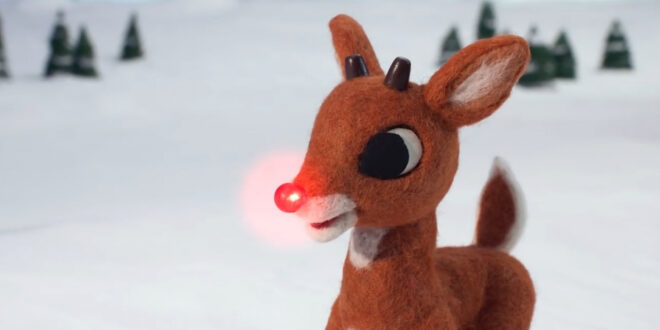 To most of us, the character of Rudolph the Red-Nosed Reindeer – immortalized in song and a popular TV special – has always been an essential part of our Christmas folklore. But Rudolph is a decidedly twentieth-century invention whose creation can be traced to a specific time and person.

Rudolph came to life in 1939 when the Chicago-based Montgomery Ward company (operators of a chain of department stores) asked one of their copywriters, 34-year-old Robert L. May, to come up with a Christmas story they could give away to shoppers as a promotional gimmick. (The Montgomery Ward stores had been buying and giving away coloring books for Christmas every year, and May’s department head saw creating a giveaway booklet of their own as a way to save money.) May, who had a penchant for writing children’s stories and limericks, was tapped to create the booklet.

May, drawing in part on the tale of The Ugly Duckling and his own background (he was a often taunted as a child for being shy, small, and slight), settled on the idea of an underdog ostracized by the reindeer community because of his physical abnormality: a glowing red nose. Looking for an alliterative name, May considered and rejected Rollo (too cheerful and carefree a name for the story of a misfit) and Reginald (too British) before deciding on Rudolph. He then proceeded to write Rudolph’s story in verse, as a series of rhyming couplets, testing it out on his 4-year-old daughter Barbara as he went along. Although Barbara was thrilled with Rudolph’s story, May’s boss was worried that a story featuring a red nose — an image associated with drinking and drunkards — was unsuitable for a Christmas tale. May responded by taking Denver Gillen, a friend from Montgomery Ward’s art department, to the Lincoln Park Zoo to sketch some deer. Gillen’s illustrations of a red-nosed reindeer overcame the hesitancy of May’s bosses, and the Rudolph story was approved. Montgomery Ward distributed 2.4 million copies of the Rudolph booklet in 1939, and although wartime paper shortages curtailed printing for the next several years, a total of 6 million copies had been given by the end of 1946.

The post-war demand for licensing the Rudolph character was tremendous, but since May had created the story as an employee of Montgomery Ward, they held the copyright and he received no royalties. Deeply in debt from the medical bills resulting from his wife’s terminal illness (she died about the time May created Rudolph), May persuaded Montgomery Ward’s corporate president, Sewell Avery, to turn the copyright over to him in January 1947. With the rights to his creation in hand, May’s financial security was assured. “Rudolph the Red-Nosed Reindeer” was printed commercially in 1947 and shown in theaters as a nine-minute cartoon the following year. The Rudolph phenomenon really took off, however, when May’s brother-in-law, songwriter Johnny Marks, developed the lyrics and melody for a Rudolph song. Marks’ musical version of “Rudolph the Red-Nosed Reindeer” (turned down by many who didn’t want to meddle with the established Santa legend) was recorded by Gene Autry in 1949, sold two million copies that year, and went on to become one of the best-selling songs of all time (second only to “White Christmas”). A TV special about Rudolph narrated by Burl Ives was produced in 1964 and remains a popular perennial holiday favorite in the USA.

May quit his copywriting job in 1951 and spent seven years managing his creation before returning to Montgomery Ward, where he worked until his retirement in 1971. May died in 1976, comfortable in the life his reindeer creation had provided for him.

In closing, although the story of Rudolph is primarily known to us through the lyrics of Johnny Marks’ song, the story May wrote is substantially different in a number of ways. Rudolph was not one of Santa’s reindeer (or the offspring of one of Santa’s reindeer), and he did not live at the North Pole. Rudolph dwelled in an “ordinary” reindeer village elsewhere, and although he was taunted and laughed at for having a shiny red nose, he was not regarded by his parents as a shameful embarrassment. Rudolph was brought up in a loving household and was a responsible reindeer with a good self-image and sense of worth. Moreover, Rudolph did not rise to fame when Santa picked him out from the reindeer herd because of his shiny nose. Santa discovered the red-nosed reindeer quite by accident, when he noticed the glow emanating from Rudolph’s room while delivering presents to Rudolph’s house. Worried that the thickening fog — already the cause of several accidents and delays — would keep him from completing his Christmas Eve rounds, Santa tapped Rudolph to lead his team, observing upon their return: “By YOU last night’s journey was actually bossed. Without you, I’m certain we’d all have been lost!”

HAPPY HOLIDAYS TO YOU AND YOURS!

User Rating: Be the first one !
Share
Previous Treasures To Be Thankful For
Next Keep Looking Up – Political Correctness and the Christian Faith