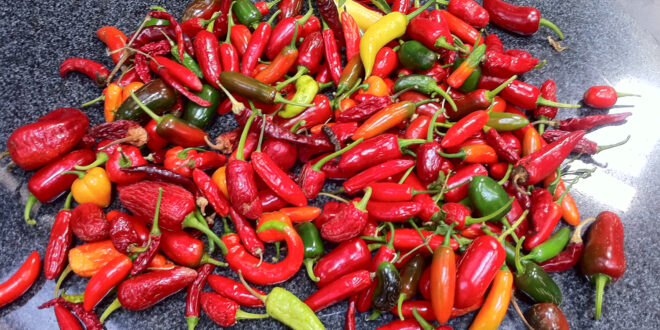 Gentlemen, eat your chili peppers. Habanero, jalapeno, Scotch bonnet — those hot but tasty varieties of the capsicum frutescens have multiple health benefits — including the ability to drive prostate cancer cells to kill themselves, researchers announced yesterday.

According to a team from the University of California at Los Angeles and Cedars-Sinai Medical Center, the hot stuff in peppers — capsaicin — caused 80 percent of active prostate cancer cells growing in mice to “follow the molecular pathways leading to apoptosis,” or cell death.

The cancer cells literally committed suicide. What’s more, the cancer tumors of the mice treated with a hot pepper extract were one-fifth the size of untreated mice.

What does this mean in the kitchen? Tex-Mex or curry fans are in luck: the hotter the pepper, the more the benefit. According to Dr. Lehmann, the mice were fed a dose of pepper extract equivalent to what a normal man might consume — 400 milligrams of extract three times a week. That amount translates to three to eight fresh habanero peppers.

Medically speaking, capsaicin inhibited the action of NF-kappa Beta, a substance found in cells that causes them to grow out of control. Capsaicin also regulates certain proteins that effect the growth of the cells.

“Increased concentrations of capsaicin caused more prostate cancer cells to freeze in a non-proliferative state,” according to the study.

Hot peppers have received accolades from researchers in recent years for their antioxidant, or cancer-fighting, effects. Anti-inflammatory properties in peppers have been tapped for treatment of migraines, arthritis and muscle pain. Hot peppers also have been found to suppress appetites and clear a stuffy head; they can aggravate existing heartburn but not cause it.

They are a good source of vitamins A, C and E, folic acid and potassium. Peppers are low in calories and sodium and contain no carbohydrates. Their taste has spawned numerous appreciation societies around the world, not to mention global competitions to determine the hottest variety on the planet.

Still, the chili pepper came under fire in a 2002 Yale University report that established a link between the hot pods and stomach cancer in Mexican workers who ate from 9 to 25 jalapenos a day. The claim has been disputed by other researchers who found that rates of stomach cancer declined in the United States — though consumption of salsa, chili and other hot foods actually had increased.