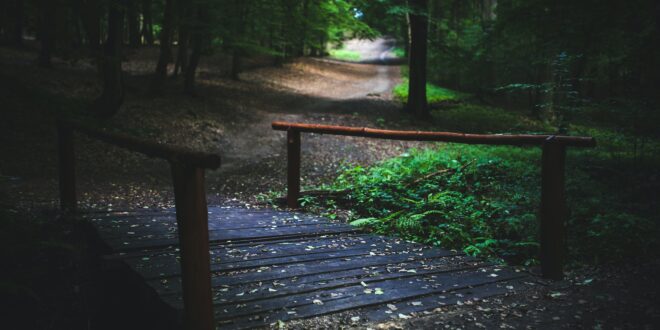 An old man going a lone highway,
Came, at the evening cold and gray,
To a chasm vast and deep and wide.
Through which was flowing a sullen tide
The old man crossed in the twilight dim,
The sullen stream had no fear for him;
But he turned when safe on the other side
And built a bridge to span the tide.

“Old man,” said a fellow pilgrim near,
You are wasting your strength with building here;
Your journey will end with the ending day,
You never again will pass this way;
You’ve crossed the chasm, deep and wide,
Why build this bridge at evening tide?

The builder lifted his old gray head;
Good friend, in the path I have come, he said,
There followed after me today
A youth whose feet must pass this way.
This chasm that has been as naught to me
To that fair-haired youth may a pitfall be;
He, too, must cross in the twilight dim;
Good friend, I am building this bridge for him!

Will Allen Dromgoole was born in Murfreesboro, Tennessee. A prolific author who wrote novels, plays, and more than 8,000 poems, she was the author of the best-selling novel The Island of the Beautiful (1911). For almost 30 years she wrote a column for the Nashville Banner called Song and Story, which recounted the life and times of Tennessee locals.

Dromgoole was educated at the New England School of Expression in Boston, Massachusetts. She studied law with her father and was elected clerk of the state Senate in 1885 and 1887. In 1894 she traveled to Texas and founded the Waco Women’s Press Club. Dromgoole started writing for the Nashville Banner in the early 1900s. A few of her unflattering articles on the Melungeons a mixed-race population in eastern Tennessee created controversy and brought her disfavor with some readers.

During World War I, Dromgoole was stationed in Norfolk, Virginia, while she served in the U.S. Naval Reserve, one of the first women to do so. Her duties included library work and lecturing to sailors on patriotic themes. Dromgoole was appointed poet laureate of the Poetry Society of the South in 1930.