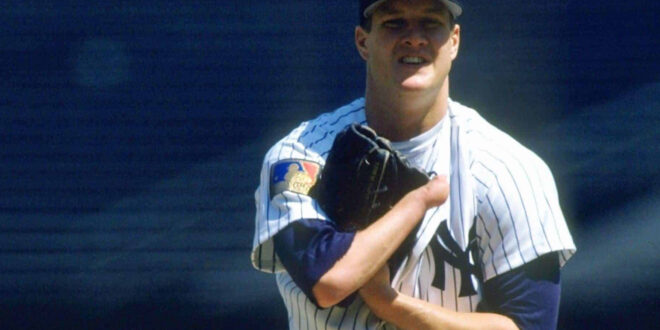 Jim Abbott has battled the odds his entire life. Despite being born with only one hand he was the 15th player to ever make a professional debut in the Major Leagues. Many considered the move a publicity stunt by manager Doug Rader, but after struggling early, Abbott proved his doubters wrong by winning 12 games with a 3.92 ERA in his rookie season.

On the mound, Abbott wore a right-hander’s fielder’s glove at the end of his right arm. While completing his follow-through after delivering a pitch, he rapidly switched the glove to his left hand so he could handle any balls hit back to him. In that first 1989 season as a professional he won more games as a rookie than any other previous player without Major League experience.

Abbott spent hours as a youngster bouncing a ball off a wall to practice fielding as well as throwing. He was the starting quarterback on his high school football team, which went to the finals of the Michigan state championship, and he showed enough promise as a pitcher to be drafted by the Toronto Blue Jays shortly after graduation.

However, Abbott went to the University of Michigan on a baseball scholarship. Abbott led the Wolverines to Big Ten titles in his freshmen and junior years and won the prestigious Golden Spikes Award, presented annually to the outstanding college baseball player in the United States.He had a career record of 26 wins and 8 losses at the school.

As a member of Team USA in 1987, he became the first American pitcher in 25 years to beat a Cuban team on Cuban soil. The team won a silver medal at the Pan-American Games and Abbott won the U. S. Baseball Federation’s Golden Spikes award as the best amateur player in the country.

Abbott participated in the 1988 Summer Olympic Games, pitching a complete game seven hitter, leading the United States to the Gold Medal in a 5-3 victory over Japan. The United States first ever, gold medal in Olympic Baseball competition.

He then joined the California Angels following the Olympics. Jim made his pro debut in spring training and made it to the Major Leagues without playing in the minor leagues, which was the beginning of a tremendous Major League career. His most famous highpoint is perhaps throwing a no-hitter for the New York Yankees at Yankee Stadium in 1993.

His baseball achievements include the Sullivan Award (best amateur athlete in the United States), male athlete of the year for the 1988 Olympic Games, and many awards at Michigan including the Jesse Owens Athlete of the year. But the awards that best define Jim Abbott would be those that exemplify courage and overcoming adversity.

Jim Abbott was invited to throw out the first pitch at game 7 of the 2002 World Series and recently participated in his first Yankees Old Timers Day.

As a philanthropist, Jim Abbott donated 100,000 dollars to Amigos de los Ninos, an organization that aids groups that care for children in California.

He is an inspiration to all that meet him or have followed his career. More than his no-hitter, his 13 strike out game, a seven game winning streak, overcoming an eleven game losing streak, Jim Abbott became a great baseball player and a great person. He learned to overcome adversity and be an inspiration to those around him.

On A Personal Note
Jim lives in California with his wife, two children and their dog. His parents still live in Michigan. Jim and his family take the Summer off each year to stay at the lake, and visit with family and friends. Jim has a younger brother.

Jim Abbott Time Line
1985: Drafted, selected by the Toronto Blue Jays in the 36th round of the 1985 free-agent draft; did not sign, instead went to college at Michigan University. Posted a 26-8 mark with a 3.03 ERA in three years at Michigan.
1987: Named the Golden Spikes Award winner by USA Baseball;
1987: He was the first baseball player to win the AAU’s Sullivan Award as the top amateur athlete of the year. The Sullivan, known as the ” Oscar” of sports awards, and older than The Heisman, the AAU Sullivan Award honors the outstanding amateur athlete in the United States. It has been presented annually by the AAU since 1930.
1987: August – Jim Abbott carried the United States flag during the opening ceremonies at the 1987 Pan American Games in lndianapolis, Indiana.
1987: July 18, the first American pitcher to defeat Cuba in Cuba in 25 years.
1987 and 1988: Geoff Zahn Award as Michigan’s Most Valuable Pitcher
1988: Voted the left-handed pitcher on The Sporting News college All-America team.
1988: Member of the U.S. Olympic baseball team. Abbott pitched a complete game leading the United States to a gold medal victory over Japan, in Seoul, Korea.
1988: The first baseball player to win the Jesse Owens Award as Big Ten Male Athlete of the Year.
1988: Big Ten Baseball Player of the Year
1988: Drafted by the California Angels in the 1st round (8th pick) of the 1988 amateur draft. Jim Abbott was one of only three pitchers during the 1980s to win his first professional game at the major league level.
1991: Victory Award recipient at the Kennedy Center Washington D.C.
1992: Traded by the California Angels to the New York Yankees for J.T. Snow, Jerry Nielsen, and Russ Springer.
1993: As the pitcher for the Yankees Jim Abbott no-hit the Tribe, 4-0, in a game at Yankee Stadium. Abbott was the first Yankees pitcher to throw a no-hitter in a decade.
1995: Signed as a Free Agent with the Chicago White Sox. In the same year he was traded by the Chicago White Sox with Tim Fortugno to the California Angels for McKay Christensen, John Snyder, Andrew Lorraine, and Bill Simas.
1996: Signed as a Free Agent with the California Angels.
1998: Signed as a Free Agent with the Chicago White Sox.
1999: Signed as a Free Agent with the Milwaukee Brewers.
2000: Began professional motivational speaking.
2004: Inducted to the Michigan Sports Hall of Fame.
2007: Elected to the College Baseball Hall of Fame.
2008: The University of Michigan awarded him an Honorary Degree Doctor of Laws.
2008: PITCH spokesperson for the US Department of Labor

To learn more about Jim Abbott, visit his website: www.jimabbott.info