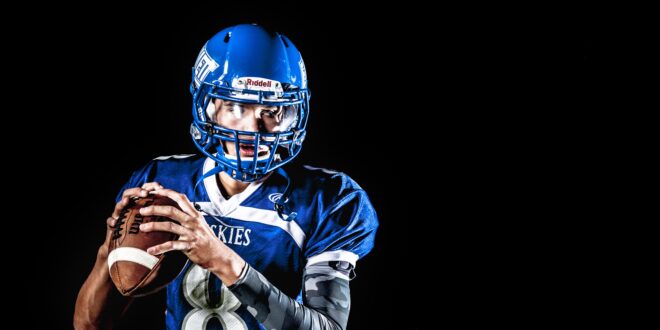 The wishbone was a college offensive football formation used very successfully by a great number of Division I college football teams back in the early 1970s. It was introduced to the college scene by the backfield coach Emory Bellard at the University of Texas in 1968. When first employed, Texas went on a 30-game win streak until Notre Dame upset them in the 1970 Cotton Bowl with the aid of a new defense called the Notre Dame split 6, designed to stop the wishbone. However, after the Texas success, the entire college football scene at every level became addicted to the wishbone, or triple option.

It continued to be too risky for the high school scene because of exposing a team to unwanted turnovers via the fumble. More important, it demanded such a disciplined athlete at quarterback assigned with the task of reading two unblocked defensive linemen at the point of attack. The passing game became almost non-existent because teams had to spend so much time perfecting the running offense. For this reason, many high schools were very reluctant to even try the wishbone! In addition, the quarterback had the potential to be hit by an unblocked defensive player on every running play!

I can recall sitting with Dan O’ Brien, our backfield coach, at the Atlantic City National Coaches Clinic back in 1969 watching a college coach present the basics of the wishbone and reassuring each other that this was impossible to do at the high school level. So we closed our notebooks and watched the coach continue with his presentation!

Fast forward to the following basketball season at Paul VI High School in Haddonfield, NJ: O’Brien and I were talking football before going into the gym to see our team play. When Dan, out of the blue, suggested we run the wishbone offense for the upcoming season! We had a pretty good team coming back, and I reminded Dan what we concluded about the wishbone while attending last year’s clinic! He continued. It’s new, different, not too many folks would know how to defend it, and the defenses would have only one week to prepare for it due to the fact that no one else was running the formation. All of his coaching points were identical to what the coach presented at the football clinic the previous spring. I suggested we think about it and keep the conversation ongoing. We would be the first team to run the offense in our neck of the woods.

We entered the court to enjoy the game. I remember we were sitting under the basket at the end of the court, and the game proved to be exciting and we were winning, which helped a lot!

Then a play developed in front of us that changed our minds completely about running the wishbone! Our quarterback Bill Deery, who was playing in the game, intercepted a pass and headed down the court on a two-on-one break. When the defensive player committed to him, Bill delivered a blind cross-court pass, on the money, to a teammate, which resulted in a layup. Dan and I looked at each other and both agreed then and there! If we were going to run the wishbone, Bill Deery was the QB to make it work!

The next day, I called the University of Texas coaching office and asked for some information about their wishbone. They said they did not give out such information but that they had produced a training film that we could purchase through the NCAA. After discussing the purchase with my wife, I called the NCAA film division and bought a copy of the film for $300. That was half the amount I made for coaching a full season at Paul VI.

Upon receiving the film, Dan and I, along with Bill, sat down and watched the training film. Afterward we went outside and introduced Bill to the steps of the quarterback after taking the snap from center. He performed as if the offense was designed for him!

From that day on, Bill Deery internalized the training film and made himself into a true triple-option quarterback under the watchful eye of Coach O’Brien. The first time we ran the play in a game, Bill read the reads (unblocked linemen) that resulted in a pitchout to our great halfback Mike Bush, who ran for a 70-yard touchdown! We came within one play of being undefeated and finished 8-1 and ranked No. 3 in the top 10 poll of our area. Mike Lyons, Joe Orlando, Chuck Doughty, Joe La Castro, Jack Kelleher, Joe Daniels, Jim Murphy, Tom Gain, Bob Weast, Tim Kelly, Mike Byrne, Stash Milozewski, and Larry O Brien were all part of the mix. Bill was awarded the offensive back of the year award and was recruited by Lou Holtz who was the head coach at William and Mary University! Bill went on to establish an NCAA ground-gaining record for a quarterback over a career!

Bill graduated, but many of our players were returning for the upcoming season. During the off-season, Coach Dub Wear and I traveled to the U of Texas spring football practice to gather more information about our new offense. We learned how to predetermine certain plays in the offense based on how the defense was playing us, and we learned that Texas looked to play good athletes at QB, not necessarily the typical QB type players. That information led us to our next quarterback, wide receiver Bob Jackson. A 6-foot-4-inch, 215-pound athlete who, coupled with a terrific defense, led his team to an undefeated season and the No. 1 ranking in our area. Bob received many awards for his efforts and was recruited by many Division I college programs but settled on the Naval Academy. Bob had a spectacular career at Navy, and after graduation, retired many years later, from a career as a naval officer!

Fast forward 10 years later. While coaching at Oakcrest High School in 1979, I got wind of an adjustment Emory Bellard, the inventor of the wishbone, made to the wishbone that was proven to be very successful for him, the current head coach at Mississippi State U. He called their wrinkle the wing-bone. Our staff and I traveled to Mississippi State for their spring training, and when we returned, we again were off and running! With the help of more great players–namely Jim Finnegan, Bob Furca, Darren Drozdov, Darryl Smith, Frank Emper, Rich Gray, Mario Cappellutti, Jeff Mick, Pierre Reid, Shawn McDonald, John Platenella, Lamont Daughtry, Lou Parks, Bill Daughtry, Mark Whittaker, Brian Husta, Ralph Leek, Victor Polizzotti, Mike Lopez, Jose Flores–we went on a roll of consistently winning football games!

We made a living on an offense that many considered too difficult for high school players to execute! But I have learned that young players were very receptive to the idea of running where the brave dare not go!

Defensively, we also made some changes in our schemes. The universal defense back in the day was the 5-2 defensive alignment. Notre Dame designed a new defense with new wrinkles and called it the split 6. Frank Delape, Mike Hansel, Bill Bottino, Tony Santangelo. Steve Burley, Mike Bernert, Vince Chairo, Bob Hinger, Steve Macdonough, Dave Sherwood, Tom Gain and Joe Grace all gave us good reason to try this new defensive scheme. We jumped on the split 6 back in 1968 and gave offenses something to think about when they played us! We received a copy of the Notre Dame defensive playbook from a former Notre Dame player! John Ray, the defensive coordinator at Notre Dame in the late 60s and early 70s, designed the split 6 that provided then-coach Ara Parshegian many football wins.

But let’s never forget that any athletic success is solely due to the fantastic athletes in the program. There is an old quote that coaches use over and over: “In all of coaching, it has never been about the coaching or the X’s and O’s. It’s always been about the Jimmies and the Joes!” The players!

Fortunately, throughout my coaching career, we were blessed with some mighty fine Jimmies and Joes–those who saw the advantage of trying new and different approaches to the game and worked tirelessly to achieve great results.

Our players truly ran where the brave dared not go!