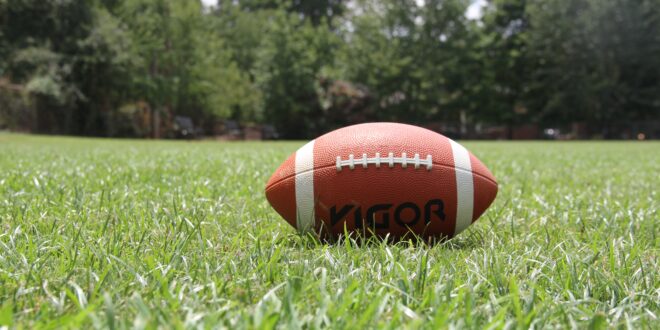 As the windows of my car were defrosting, I listened to a song I had heard at least 100 times that week. The song was “In Christ Alone,” performed by Michael English, lyrics by Shawn Craig, and music by Don Koch. I sat and listened again to the words and music which had so inspired me all week long. With the song ending and the windows fully defrosted, I was ready for my short drive to Rich Stadium. But, instead of heading for the game, I sat and listened to the song again and again.

Finally, I pulled a tablet from my playbook and wrote down the words to that incredible song. I sensed God telling me that somehow He wanted me to share that song with someone that day. Perhaps it would be with a teammate, friend, or even a stranger. But right there in my car, I promised God I would obey.

Well, little did I realize what God had planned.

We won our game against Houston 41-38 in overtime. A game in which we were losing 35-3 midway through the 3rd quarter. A game now known as the greatest comeback in NFL history.

In Christ alone will I glory,
Though I could pride myself in battle won.
For I have been blessed beyond measure,
And by His strength alone I overcome.
Oh, I could stop and count successes,
Like diamonds in my hand.
But those trophies could not equal, to the grace by which I stand.

In Christ alone,
I place my trust,
And find my glory in the power of the cross.
In every victory, let it be said of me,
My source of strength, my source of hope,
Is Christ alone.

In Christ alone will I glory,
For only by His grace, I am redeemed
And only His tender mercy, could reach
Beyond my weakness to my need.
Now, I seek no greater honor than just to know Him more
And to count my gains but losses, and to the Glory of my Lord.

Behind all the hoopla surrounding the greatest comeback in NFL history, you could hear the question being asked, was God on the Bills’ side for that game? The answer, of course, was yes! But let me also say, God was on the Houston Oilers’ side as well. You might say, well how could that be since the Bills won? Let me use this illustration. As the father of two girls (Lia and Aviry), I love them both very much. When they play a game together, as their father, I am not concerned with who wins and who loses. What is most important is that they learn the lessons they are to be taught from playing the game. Many times, I will even help determine the outcome of their game. This helps to get a point across to one or both girls.

In the same way, God looks at us as His children. He doesn’t care who wins or loses a football game, but only that we learn from each contest and draw closer to Him as a result of what we have learned.

The song, “In Christ Alone,” has been special to me in many ways. It definitely encouraged me to have the strength and the courage to come back against the Oilers. But as I would learn almost a month later, the song had a much deeper message for me to learn. You see, after our crushing 52-17 loss to the Cowboys in SuperBowl XXVII, I was devastated. The devastation was compounded by the fact that I had played more than half of the game. I couldn’t understand how God could allow us to get beat like that, especially after the Houston miracle. I was flying home from Pasadena when I realized the answer. For the first two hours of the trip, I was going crazy trying to figure out why the SuperBowl went the way it did.

Finally, I could take it no longer. I realized I could be asking the same questions the rest of my life. I needed some peace of mind. The only thing I could think to do was to put on my headset and listen to “In Christ Alone.” I sought comfort from the song which gave me peace during the stressful week prior to the Houston game. The message I was now hearing was that we can experience victory in all our circumstances through Jesus Christ. He gives us the strength and hope to overcome all odds.

Looking back on both the Houston game and the Super Bowl, I realize the circumstances I had to overcome were nothing compared to what so many hurting people face on a daily basis. That is why when I think of the song, “In Christ Alone,” I think of how it inspired me and worked miracles in my life. I get even more excited about how it can encourage and inspire others whose trials are much more difficult than those I’ve written about.

Reich was the quarterbacks coach of the Indianapolis Colts, starting in 2008. He previously served as offensive coaching staff assistant with the Colts in 2008 and was a coaching intern from 2006-07. Reich was born December 4, 1961 in Freeport, N.Y. He resides with his wife, Linda, and their three children in Indianapolis.

After my second brain surgery, I experienced an amazing visitation.In 2005, I had my second …