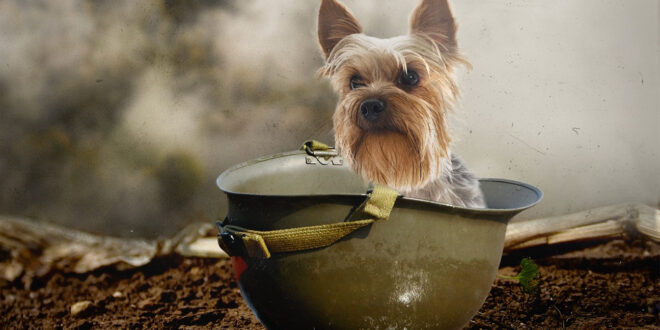 Dogs have been a part of warfare since the beginning of history. What people usually envisage is a German Shepherd or some other trusty and above all sizeable canine companion – probably not a 4 pound (1.8 kg) female Yorkshire terrier!

The terrier, Smoky, indeed proved that size is not everything and that even the smallest of creatures can be brave. Smoky was first found in an abandoned foxhole in February 1944, in a jungle in New Guinea. Soon afterward she was purchased by Corporal Bill Wynne, for two Australian dollars.

Wynne became very attached to Smoky, allowing her to sleep in his tent and sharing his food with her. As she was not officially a “war dog” Smoky could not receive veterinary medicine nor a balanced diet suitable for the jungle climate.

Nevertheless, the dog never fell ill, nor was she underfed. Smoky soon became an irreplaceable part of the 5th Air Force, 26th Photo Recon Squadron, flying up to 12 air/sea rescue and photo reconnaissance missions. During the flights she usually ran around the PBY Catalina flying boat’s fuselage, dangling below the waist gunners feet.

Smoky took part in 12 combat missions, receiving eight battle stars. She survived more than 150 Japanese bombing raids and even a typhoon which ravaged the coast of Okinawa.

Becoming more and more popular among the troops, Smoky learned numerous tricks and was even parachuted from 30 feet (9.1 m) out of a tree. The amusement that the tiny dog provided to the soldiers was priceless, for they were always in desperate need to keep their minds off the horrors of war.

In 1944 she was named the Champion Mascot in the Southwest Pacific Area by the Yank Down Under Magazine, all due to her willingness to learn various tricks and participate in gags, often performing for wounded soldiers.

Her owner, Bill Wynne credited her for saving his life while they were on a transport ship when she warned him of incoming shells. Unfortunately, the other eight men who were standing next to Wynne were not so lucky, as they were blown away, while Smoky’s owner managed to duck just in time.

Perhaps her most significant accomplishment was running a telegraph wire through a 70-foot-long (21m) pipe that was 8 inches (200 mm) in diameter while under heavy bombardment. She was small enough to fit through the pipe, and her efforts proved to be crucial for winning the 1944 Luzon campaign in the Philippines.

Wynne himself described in detail Smoky’s mission in a TV interview for NBC after the war:

I tied a string (tied to the wire) to Smoky’s collar and ran to the other end of the culvert . . . (Smoky) made a few steps in and then ran back. “Come, Smoky,” I said sharply, and she started through again. When she was about 10 feet in, the string caught up and she looked over her shoulder as much as to say “what’s holding us up there?” The string loosened from the snag and she came on again. By now the dust was rising from the shuffle of her paws as she crawled through the dirt and mold and I could no longer see her. I called and pleaded, not knowing for certain whether she was coming or not. At last, about 20 feet away, I saw two little amber eyes and heard a faint whimpering sound . . . at 15 feet away, she broke into a run. We were so happy at Smoky’s success that we patted and praised her for a full five minutes.

Her act of courage resulted in relieving 250 ground crewmen from risking their lives, for the work she had done in a matter of minutes would have taken three days of digging under daily enemy bombing attacks. The quick resolution of the telegraph wire malfunction kept 40 United States fighters and reconnaissance planes operational in a crucial moment.

After the war, Smoky became a pioneer in dog-therapy in veteran hospitals and had a career in Hollywood and television, presenting her performing skills.

In 1957, after a long and fulfilled life, Smoky the Yorkshire terrier died. Nearly 50 years later in 2005, she was commemorated. A monument was erected in her honor depicting the terrier sitting in a GI helmet. It was dedicated to:

“Smoky, the Yorkie Doodle Dandy, and the Dogs of All Wars.”

You can see this story at War History Online – click here >

User Rating: Be the first one !
Share
Previous Cops & Teachers
Next Things You Learn in the South