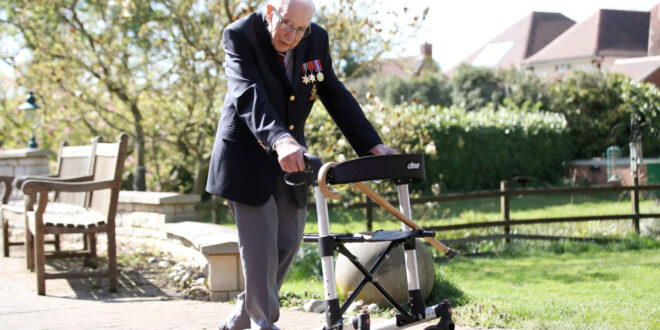 As of April 16, 2020, a British Army veteran raised more than £13 million ($16.2 million) without ever leaving home. He did this for his country’s National Health Service “heroes,” who are fighting the Coronavirus.

Tom Moore, 99, pledged to walk 100 laps around his back garden before his 100th birthday on April 30, hoping to raise about £1,000 ($1,250) for NHS Charities Together, which helps charities raise money for United Kingdom hospitals and supports NHS staff and volunteers caring for COVID-19 patients. He aimed to walk 10 laps each day with the help of a walking frame.

Within about 24 hours he reached his initial goal, according to a post on his fundraising page April 10. A few days later, Moore had raised more than £1 million ($1.25 million). On Thursday, Mr. Moore announced he had completed his 100 laps and thanked the public for their contributions.

“Thank you so much. The ‘JustGiving page’ has crashed with all your amazing efforts,” he tweeted. “I salute you all. Incredible and now words fail me.”

Moore was born in Keighley, Yorkshire, where he trained as a civil engineer before enlisting in the army at the beginning of World War II. He later served in India and Indonesia.

He told the BBC that he began raising the funds to thank the NHS staff who helped him with treatment for cancer and a broken hip.

When you think of who it is all for – all those brave and super doctors and nurses we have got,” he told the outlet. “I think they deserve every penny, and I hope we get some more for them too.”

Ellie Orton, the chief executive of NHS Charities Together, called Moore “a true inspiration. What he has achieved in bringing people together, and highlighting the appeal, has been remarkable,” Orton said. “We couldn’t be more grateful and impressed with everything he has done. Thank you to everyone that has supported him in his 100 laps and, of course, to him personally for the difference he will make to frontline staff, volunteers and patients during this incredibly difficult time.”