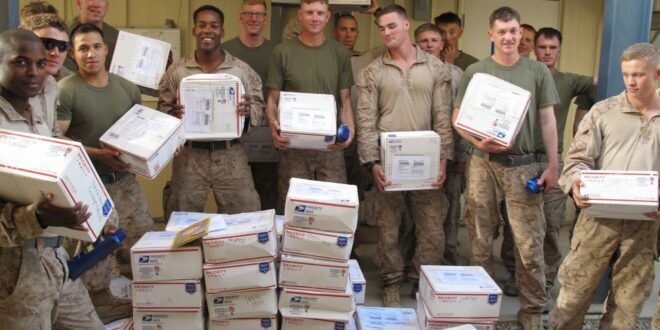 All I really wanted for Christmas was to do something to support our troops. I prayed on this goal daily until I thought I had received an answer, about how to help the troops. I started searching and found a great list of troops requesting things and current addresses from the website: www.anysoldier.com

My Christmas Wish started as a yearly donation drive in which my school gathers and donates items to the military. The drive took two months to complete and the community was very willing to help us in our efforts.

This year, we gathered enough for many troops and started wondering how much it would cost to send all of it overseas. Very expensive, as it turned out.

As I lugged all the heavy packages to the Postal Annex with my three year old son in tow, I ran out of hands. There was an older gentleman who held the door for me. He was a tall, slender man with wavy silver grey hair, warm, brown eyes, and a deep, richly toned, melodic voice. (If the description seems silly, allow me to explain. I am a singer, music teacher and voice teacher, so I pay particular attention to how someone sounds when they speak, their diction, any accent, and even any inflection I detect in their voice.)

He asked many questions about where the packages were going, did I have family in the military, why I had decided to do this project in the first place. I laid out the complete story to him and explained the compelling feeling that The Lord was calling me to task. Although I did not currently have family in the military, many in my family on both sides had served proudly over the years. I related the information about the website: www.anysoldier.com.

He then asked what could he do to help. I explained that it would be expensive and a couple of dollars to help pay for postage would be very much appreciated. I was caught off guard when he said he would.

We talked about life, our soldiers, family, my work, and religion while each care package was carefully weighed and sealed with all the proper customs forms. He was an adept listener and good conversationalist. It was a cold, crisp, December evening and the day turned quickly to evening so I offered to get us all coffee next door at the Starbucks. When I returned, he was still there. By now, there was a small crowd of people entering into the Postal Annex with the same questions. I answered them as they came and went, busily running after the next errand on their list. With less than a week before Christmas, most people just flew by. Not this man, he waited patiently, drank his coffee, and just took the time to speak with me like he had all the time in the world. It turned out, he happened to be a veteran. He, Charles, had also served our country proudly some years ago. Charles said he never received any packages. The packages were finally ready to be mailed off. When the total came up, it was $170.00!! My mind reeled! I didn’t have that kind of money and was lost in my train of thought that the packages would have to wait until I could get more money.

Without so much as a word, Charles quickly paid for the entire mailing!!

I was too stunned to speak, but stumbled to find the words as I realized what had happened.

I was concerned that he might not also have this kind of money and it would put his family at a hardship.

Then, one lady told me plainly that: “I was being foolish not to accept this man’s generosity and such an attempt would ruin his blessing.”

I finally relented. I was so overcome with a grateful, thankful heart. My eyes welled up with tears. Everyone in the room suddenly got quiet. This complete stranger had fulfilled my Christmas Wish! As I pondered this fact and how the day was shaping up, I remember thanking him repeatedly, not finding just the right words to express my deepest gratitude.

After chasing my three-year-old around, I was yet offered up another blessing from another complete stranger. This man removed a necklace with a gold cross and offered it to my son.

“Such amazing gifts, did I really deserve this,” I silently wondered.

I said “we just couldn’t take his necklace,” but relented when others told me it would interfere with his blessing. I didn’t know what to say. We put the necklace around my son’s neck. One lady told me it was “her father’s way” and “that was that.”

The overwhelming evidence of love, compassion, and willingness to help and give left me speechless. Others in the room were overcome as well. Tears welled in their eyes and the air was suddenly transformed and thick with emotions. None of us, it seemed, had experienced the good side of the human spirit in quite some time.

Charles then handed me an envelope. I just shook my head in disbelief.

“Whatever is in this envelope, I can’t accept,” I said.

“Oh yes, you can,” Charles began, “because you deserve it. Do something for yourself and spread some Christmas cheer.”

Charles looked into my eyes and calmly said,” Everything is going to be okay.”

“Open it after I leave,” I was instructed.

We again spoke for a few minutes. “Thank you… for everything Charles,” I said. Walking out the door, he said, “Have a Merry Christmas,” and then he quickly disappeared into the night.

By this time, most people had left and it was near closing time. I went to the bathroom as we were leaving and then remembered the envelope.

I opened it and nearly fainted!! Inside was $500.00 dollars! Based on the previous mailings, it was about the amount I needed to mail the remaining care packages I had left at the house.

I was more than stunned and began to cry. I came out and told the employees the contents. We were all in awe in light of the recent events. I explained to them if they saw Charles, to please report to him that I was spending the money on the postage to send the packages and some Christmas Cheer. They said they would.

The next day, I went back and happily mailed most of the remaining packages, 50 or more, so it is a large task. I also spread some Christmas cheer by buying cake slices for some children and others nearby.

Charles, wherever you are, I think you would be pleased to know that because of you, hundreds of American troops will receive just what they wanted this holiday season. Thank you from the bottom of my heart. I experienced the very unexpected, most amazing Christmas gifts I have ever received or ever would receive.

Charles and men like him are everyday heroes, angels on earth in a sense.

The man who offered his necklace to my son. People who do extraordinary things for complete strangers to save a life, lend a hand, or extend to them a helpful gesture. I’m so glad there are EVERYDAY HEROES. From the agencies which comprise of Homeland Security, police, firefighters, special agents, Coastguard, soldiers, Army, Navy, Air Force, Marines and all the people left in this world like Charles.

Please share this story about the power of prayer and everyday heroes.

Previous Billy Graham’s Einstein Speech
Next Believe What You Feel