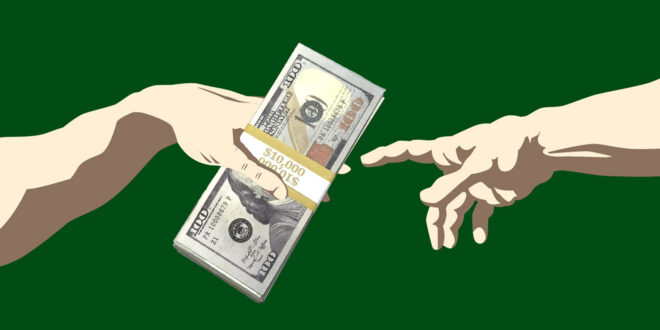 Adam said he didn’t have anyone to talk to.

So, God said he was going to make Adam a companion and that it would be a woman. God said, “This person will gather food for you, and when you discover clothing she’ll wash it for you. She will always agree with every decision you make. She will bear your children and never ask you to get up in the middle of the night to take care of them. She will never nag you, and she will always be the first to admit she was wrong when you’ve had a disagreement. She will never have a headache and will freely give you love and passion whenever you need it.”

Adam asked God, “What will a woman like this cost?”

Then Adam asked, “What can I get for a rib?” And the rest is history.

A new monk arrives at the monastery. He is assigned to help the other monks in copying the old texts by hand. He notices, however, that they are copying from copies, not the original manuscripts. So, the new monk goes to the head monk to ask him about this, pointing out that if there were an error in the first copy, that error would be continued in all of the subsequent copies.

The head monk says, “We have been copying from the copies for centuries, but you make a good point, my son.”

So, he goes down into the cellar with one of the copies to check it against the original. Hours go by and nobody sees him. So, one of the monks goes downstairs to look for him. Hearing sobbing coming from the back of the cellar, he finds the old monk leaning over one of the original books crying. He asks the old monk what’s wrong, and in a choked voice came the reply, “The word is celebrate.”

An atheist was taking a walk through the woods, admiring all that the “accident of evolution” had created. “What majestic trees! What powerful rivers! What beautiful animals!” he said to himself.

As he was walking alongside the river he heard a rustling in the bushes behind him. He turned to look. He saw a 7-foot grizzly charge towards him. He ran as fast as he could up the path. He looked over his shoulder and saw that the bear was closing. He ran even faster, so scared that tears were coming to his eyes. He looked over his shoulder again, and the bear was even closer. His heart was pumping frantically and he tried to run even faster. He tripped and fell to the ground. He rolled over to pick himself up but saw the bear, right on top of him: reaching for him with his left paw and raising his right paw to strike him.

At that instant the atheist cried out “Oh, my God!…”
Time stopped.
The bear froze.
The forest was silent.
Even the river stopped moving.

As a bright light shone upon the man, a voice came out of the sky: “You deny my existence for all of these years; teach others I don’t exist; and, even credit creation to a cosmic accident. Do you expect me to help you out of this predicament? Am I to count you as a believer?”

The atheist looked directly into the light: “It would be hypocritical of me to suddenly ask You to treat me as a Christian now, but perhaps could you make the bear a Christian?”

“Very well,” the voice said.
The light went out.
The river ran again.
And the sounds of the forest resumed.

And then the bear dropped its right paw… brought both paws together… bowed its head and spoke: “Lord, I am very thankful for this food which I am about to receive.”

His wife’s graveside service was just barely finished, when there was a massive
clap of thunder, followed by a tremendous bolt of lightning, accompanied by even
more thunder rumbling in the distance. The little, old man looked at the pastor
and calmly said, “Well, she’s there.”

Lost on a rainy night, a nun stumbles across a monastery and requests shelter there. Fortunately, she’s just in time for dinner and was treated to the best fish and chips she had ever tasted.

After dinner, she went into the kitchen to thank the chefs. She was met by two of the Brothers. The first one says, “Hello, I am Brother Michael, and this is Brother Charles.”

“I’m very pleased to meet you,” replies the nun. “I just wanted to thank you for a wonderful dinner. The fish and chips were the best I’ve ever had. Out of curiosity, who cooked what?”

She turned to the other Brother and says “then you must be…?”

After being nearly snowbound for two weeks last winter, a Seattle man departed for his vacation in Miami Beach, where he was to meet his wife the next day at the conclusion of her business trip to Minneapolis. They were looking forward to pleasant weather and a nice time together.

Unfortunately, there was some sort of mix up at the boarding gate, and the man was told he would have to wait for a later flight. He tried to appeal to a supervisor but was told the airline was not responsible for the problem and it would do no good to complain.

Upon arrival at the hotel the next day, he discovered that Miami Beach was having a heat wave, and its weather was almost as uncomfortably hot as Seattle’s was cold. The desk clerk gave him a message that his wife would arrive as planned. He could hardly wait to get into the pool area to cool off, and he quickly sent his wife an email, but due to his haste he made an error in the address.

His message therefore arrived at the home of an elderly preacher’s wife whose even older husband had died only the day before. When the grieving widow opened her email, she took one look at the monitor, let out an anguished scream, and fell to the floor dead. Her family rushed to her room where they saw this message on the screen:

Dearest wife, departed yesterday as you know. Just now got checked in. Some confusion at the gate. Appeal was denied. Received confirmation of your arrival tomorrow.

Your loving husband.
P.S. Things are not as we thought.
You’re going to be surprised at how hot it is down here.

There was an atheist living next door to an old woman who was a Christian.

Everyday he could hear her praying and praising God for all of the things He had done for her.  One day the old woman fell on hard times and she had no food in her house.

The atheist overheard her praying to God to please send her some food. So, off the atheist goes to the grocery store, thinking he was gonna fix the old gal once and for all. He bought two bags of groceries and, after placing them on her porch, he rang her bell and then hid in some nearby bushes.

When the old woman came out of her house, she saw the bags of groceries and started giving thanks to the Lord for sending her the food.

At that point, the happy atheist JUMPED from the bushes and shouted, “AH-HA! The Lord didn’t send you those groceries! It was I who put them there!”

Without a pause, the old woman shot back, “PRAISE YOU, DEAR LORD. NOT ONLY DID YOU SEND THE GROCERIES, BUT YOU MADE THE DEVIL PAY FOR THEM!”

User Rating: Be the first one !
Share
Previous Teachers & School
Next Church Humor