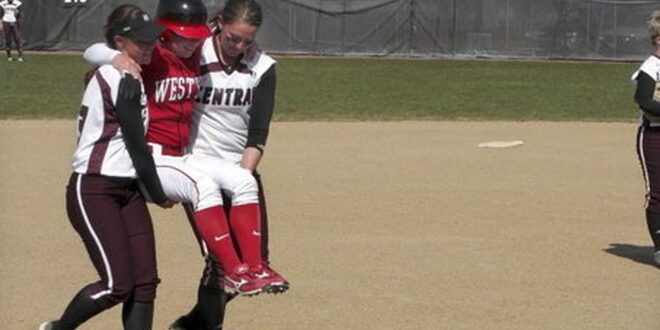 Something remarkable happened in a college softball game last Saturday in Ellensburg, Wash. At least, I am conditioned to think it was remarkable, since it involved an act of sportsmanship, with two players helping an injured opponent complete the home run she had just slugged.

Why this generous act should seem so unusual probably stems from the normal range of bulked-up baseball players, police-blotter football players, diving soccer and hockey players and other high-profile professionals.

The moment of grace came after Sara Tucholsky, a diminutive senior for Western Oregon, hit what looked like a three-run homer against Central Washington. Never in her 21 years had Tucholsky propelled a ball over a fence, so she did not have her home run trot in order, gazing in awe, missing first base. When she turned back to touch the bag, her right knee buckled, and she went down, crying and crawling back to first base.

Pam Knox, the Western Oregon coach, made sure no teammates touched Tucholsky, which would have automatically made her unable to advance. The umpires ruled that if Tucholsky could not make it around the bases, two runs would score but she would be credited with only a single. (She’ll kill me if I take it away from her, Knox thought).

Then Mallory Holtman, the powerful first baseman for Central Washington, said words that brought a chill to everybody who heard them: “Excuse me, would it be O.K. if we carried her around and she touched each bag?”

The umpires huddled and said it would be legal, so Holtman and the Central Washington shortstop, Liz Wallace, lifted Tucholsky, hands crossed under her, and carried her to second base, and gently lowered her so she could touch the base. Then Holtman and Wallace started to giggle, and so did Tucholsky, through her tears, and the three of them continued this odd procession to third base and home to a standing ovation.

“Everybody was crying,” Knox recalled on Tuesday. “It was an away game, and our four fans were crying. We couldn’t hit after that.”

The extra run made it easier for Western Oregon to win the second game, 4-2, and sweep the doubleheader. More important, all involved realized they had taken part in an event they would always remember. (Credit where credit is due: I heard about this incident via Jared Max on WCBS-AM news radio Tuesday morning and later I found a nice article by Graham Hays on ESPN.com before making my own calls.)

The question is, where did it come from, this impulsive gesture by Mallory Holtman?

“She hit it over the fence,” Holtman said Tuesday. “She deserved it. Anybody would have done it. I just beat them to it.” She said she had been taught by her coach, Gary Frederick, that “winning is not everything.”

Is there something intrinsic to women’s sports that caused this generosity? Holtman, nearly 23, did not think so. “Not many people are ever in that position,” she said. “I would hope that our baseball players would do it.”

Knox, the Western Oregon coach, said the act “came from character. They’re playing for a coach who instills it,” she said.

Knox said she absolutely would not say this demonstrated some major difference between women’s and men’s sports: “As coaches, we are so competitive, we forget this stuff. By God, I would hope I would have done the same thing.”

Would the Oakland A’s have carried a sore-legged Kirk Gibson around the bases to complete his two-run homer that gave the Dodgers a 5-4 comeback victory in the opening game of the 1988 World Series? My guess is that if Gibson had crumpled in the dirt, Tony La Russa (or Billy Martin or Leo Durocher or Earl Weaver or just about any manager) would have said, “Let him lie there.” But let’s grant that those stakes are much higher.

We’ve all seen sportsmanship at a high level. Golf depends upon personal adherence to the rules. In tennis a player occasionally yields a point — not usually at a crucial moment — producing a sweet little patter of applause.

In 1999, Arsène Wenger, the French coach of Arsenal of the English Premier League, insisted upon a replay of a cup match after a young Arsenal player had unwittingly set up a goal in violation of the unwritten code when an opponent is injured. So maybe sportsmanship is universal, out there, needing to be cultivated.

“It’s amazing what they did,” Tucholsky said of the Central Washington players Tuesday, while facing what she assumes will be the first surgery of her 21 years for what is suspected to be a torn ligament.

“Mallory didn’t know it was my first home run,” said Tucholsky, whose college career will end with a .153 batting average and exactly one home run. “It just says a lot about them.”

Tucholsky was too immobile to join the handshake line at the end of the game Saturday, but her family has been in touch with Holtman, photographs have been exchanged, the two teams are wrapped in a bond of good feeling we can only wish did not seem so singular, so remarkable.

Previous When To Eat Fruit
Next I’ll drop my price!