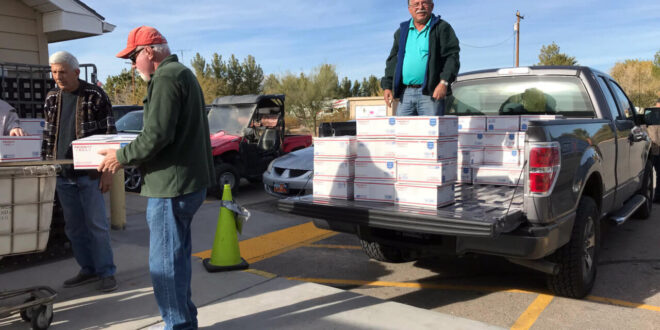 This uplifting message is all about AnySoldier.com… an online service that helps people who want to send care packages to American troops stationed all over the world. More importantly, they encourage everyone to help boost the morale American Soldiers, Marines, Sailors and Airmen overseas by writing simple letters of thanks . Of all of the replies from appreciative troops, the overwhelming feedback is the love they feel in these personalized letters from their homeland. It was March 26th, 2003. Army Sergeant Brian Horn, one of 1,000 soldiers, parachuted into enemy territory in Northern Iraq.

Five months later, Brian Horn was able to call his parents. Marty and Sue Horn had been sending their son an average of six care packages per week. So when Brian asked his parents to send more, “my wife and I thought he was kidding!” Marty Horn told me. “But Brian said, ‘no — its for the soldiers that don’t get any.'”

Both Marty and Sue Horn had spent their careers in the Military, so they immediately understood what Brian was saying. Millions of men and women serving overseas never receive any mail. Besides often lacking basic necessities, these men and women have to cope with the harsh conditions of serving overseas without signs of support from friends and family back home.

The Horns developed the idea for AnySoldier.com during that phone call. Marty created a website that explained the project and offered Brian’s address — including the words “Attn: Any Soldier”. Brian would give these packages to the soldiers not receiving any mail. After his service in the Military, Marty had gotten involved in the still-young Internet. He knew how much opportunity the Internet offered, but even he was amazed at the results. “Within two weeks, we were getting flooded with email from all over the world. It was like an avalanche.” READ MORE >

WARNING: Contents of AnySoldier.com are addictive.  Persons using this site may be overcome with tears of sympathy or tears of joy!  May also cause a sense of pride in our great nation and the fighting men and woman who defend our freedom.

To see how U.S. Troops feel about their letters, watch this!

For another heartfelt message, watch this short video (click here). This is a project that a freshman at Fairfield University had made recently. It was directed, edited, and written by Joseph Pellegrino, and it has Jack Giannini as the college student, and Wesley Darbouze as the soldier. Another example of how a simple letter can touch the life of a soldier.

Visit and Support AnySoldier.com! Take a little time to read about all of the wonderful things this non-profit organization is doing, and see how you can help. You’ll be amazed at the number of people involved in this effort.

Be sure to read “A Texas Angel,” a true and inspiring story by Laura Estes, a teacher in Central Texas. She documents the help she received from AnySoldier.com prior to shipping Christmas care packages to troops in 2004, as well as the financial aid of an anonymous “Texas Angel.” It’s a great story with a very happy ending!

And please consider sharing this message with your FaceBook Friends. Thanks for caring!