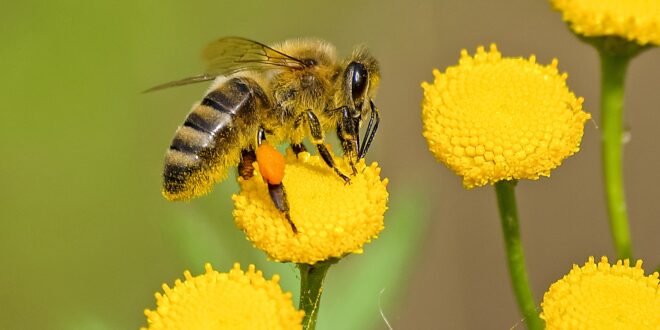 The Tired Bee: A Story about Connection

I was 12 and I watched my father carefully as he rowed on the tranquil lake. It was late summer, August, the buzzing wings of dragonflies snapped past us. I pulled back and rocked the small canoe. Dad turned and looked at me and reassured me with a wink. I still wasn’t too sure I wanted to be doing this.

Our family had been spending summers on Bear Mountain, a small park and recreational community close to the Pennsylvania border, for as long as I could remember. We all came together, about 40 of us, each summer to swim, play, bask in the sun and reconnect as a family.

I was one of the younger kids and usually excluded from my older cousins’ activities. Consequently I either babysat the younger ones or hung out with my dad.

On this particular summer afternoon, we’d gotten a canoe and decided to explore a little bit of the park itself. We let the gentle rhythm of the lake pull us into a narrow river which wound around the camping grounds. Tall evergreens, pines all of sort, dotted the banks on either side and the trip was cozy and peaceful. The cloudy skies overhead provided slight relief from the August heat. I stopped rowing, sat back and closed my eyes while I heard Dad rowing quietly.

Suddenly I heard a buzzing, close to my ear. A frantic, desperate humming coming from the right side of my head. I bolted up straight and stared at Dad.

He pointed toward me with his chin. “Don’t move and he’ll not bother you.” He kept rowing.

I thought to myself, “What is he talking about?” I looked around me and then saw it. A bee. A bee on my shoulder. Actually to be accurate, a yellow jacket. These are large and very aggressive bees, marked by bright black and yellow bands on their bodies. I lived in terror of bees, wasps and hornets. It was more than fear, it was a pathological terror that I could not explain, nor my parents, teachers or doctors cure me of. I sat there, turned into a living statue. My eyes must have looked like saucers. I hissed at Dad to do something.

He just rowed and shook his head. “He’s tired. It’s a hot day and all living creatures need rest. He’s most probably been flying up the lake and needs to give himself a break. This is a pretty big park. Once he’s rested enough, he’ll keep on going.”

Was I hearing correctly? Did my ears betray me, or was my father telling me to just let a large yellow jacket sit on my shoulder? I grimaced and he simply looked away and kept rowing. The terror gripped me like a cold hand over my heart and I swiveled my head slowly toward the right and squinted a peek. There he sat, in all his living yellow and black glory. Wings folded neatly against his body. As I watched him I was fascinated by how perfectly formed he seemed. Somehow, my curiosity overpowered my fear and I relaxed. No sooner had I done that than he began fluttering, tested his wings and flew off.

I was able to track his flight for a few moments and sure enough, he crossed the water and headed into the woods. I sat back and looked at Dad.

More than 30 years have passed since that day. My father is no longer alive, but the memory of that moment, that moment of connection, has taken root in my heart. In the ensuing years I thought long and hard about that tired little bee. I realized that for the first time in my life I felt connected to something larger than myself, and he was part of the reason. I came to believe he was sent to teach me not to fear, that we are all one, all part of the same design the Creator provided. I realized that nature is an aspect of the Creation and that we are all the Creator’s children…small or big, human or insect. No man is an island.

Oh, yes, my morbid fear of bees and wasps? It lessened. Until one day not long ago I learned that I was born with no immunity to insect venom. My doctor’s words felt like a bucket of cold water splashed over my head: the sting of a bee, wasp or hornet would kill me. The saliva or venom of smaller insects like fire ants and mosquitoes may cause seizures, as I found out later when bitten by a fire ant: full cardiac arrest. And of the bees, wasps and hornets? Never been stung, not once. They tend to buzz past me and I always get a sense that they are in quite a hurry.

Lore holds that the bee symbolizes service and their movement from one plant to another symbolizes the interconnectedness of all living things. This is a lesson that I will always carry in my heart.

Previous Coming to God
Next Your Last Flight

The other day, someone at a store in our town read that a methamphetamine lab …