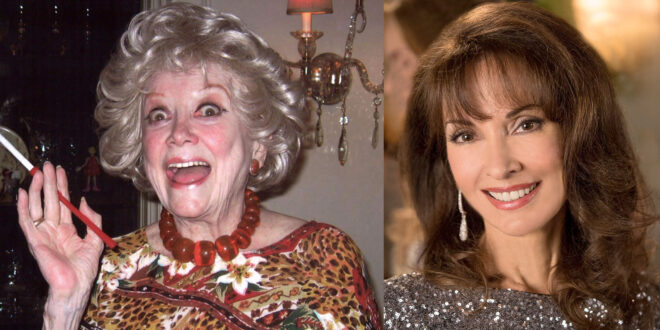 (02) The 57 on the Heinz ketchup bottle represents the number of varieties of pickle the company once had.

(03) A rat can last longer without water than a camel.

(04) Susan Lucci is the daughter of Phyllis Diller – pictured above.

(05) The Declaration of Independence was written on hemp paper. For those of you who don’t know what hemp is….

(07) A raisin dropped in a glass of fresh champagne will bounce up and down continuously from the bottom of the glass to the top.

(08) Your stomach has to produce a new layer of mucus every two weeks, or it will digest itself.

(13) Every person has a unique eye & tongue print.

(16) During the chariot scene in “Ben Hur”, a small red car can be seen in the distance.

(17) On average, 12 newborns will be given to the wrong parents daily.!

(19) Warren Beatty and Shirley McLaine are brother and sister.

(22) Playing cards were issued to British pilots in WWII. If captured, they could be soaked in water and unfolded to reveal a map for escape.

(24) Orcas (killer whales) kill sharks by torpedo-ing up into the shark’s stomach from underneath, causing the shark to explode.

(25) Donald Duck comics were banned from Finland because he doesn’t wear pants.

(26) Dr. Seuss is actually pronounced Seuss such that it sounds like “Sue-ice.”

(29) During the California gold rush of 1849, miners sent their laundry to Honolulu for washing and pressing. Due to the extremely high costs in California during these boom years, it was deemed more feasible to send their shirts to Hawaii for servicing.

(31) Because metal was scarce, the Oscars given out during World War II were made of wood.

(34) There are no clocks in Las Vegas gambling casinos.

(35) There are no words in the dictionary that rhyme with orange, purple, and silver.

(37) The name Wendy was made up for the book Peter Pan. There was never a recorded Wendy before.

(38) The very first bomb dropped by the Allies on Berlin in World War II killed the only elephant in the Berlin Zoo.

(41) If one places a tiny amount of liquor on a scorpion, it will instantly go mad and sting itself to death. hehehe

(42) Bruce Lee was so fast that they actually had to s-l-o-w film down so you could see his moves. That’s the opposite of the norm.

(43) If you have 3 quarters, 4 dimes and 4 pennies, you’d have $1.19.You would also have the largest amount of money in coins without being able to make change for a dollar.

(44) The first CD pressed in the US was Bruce Springsteen’s “Born in the USA”.

(45) The mask used by Michael Myers in the original “Halloween” was actually a Captain Kirk mask painted white.

(46) The original name for butterfly was flutterby

(47) The phrase “rule of thumb” is derived from an old English law which stated that you couldn’t beat your wife with anything wider than your thumb.

(48) The first product Motorola started to develop was a record player for automobiles. At that time, the most known player on the market was Victrola, so they called themselves Motorola.

(49) Roses may be red, but violets are indeed violet.

(50) By raising your legs slowly and laying on your back, you cannot sink into quicksand.

(51) Casey Kasem is the voice of Shaggy on Scooby Doo.

(52) Celery has negative calories. It takes more calories to eat a piece of celery than the celery has in it to begin with.

(54) In Gulliver’s Travels, Jonathan Swift described the two moons of Mars, Phobos and Deimos, giving their exact size and speeds of rotation. He did this more than 100 years before either moon was discovered.

(55) Chewing gum while peeling onions will keep you from crying.

(57) An old law in Bellingham, Washington, made it illegal for a woman to take more than 3 steps backwards while dancing.

(59) The glue on Israeli postage is certified kosher.

(60) The Guinness Book of Records holds the record for being the book most often stolen from Public Libraries.

(61) Astronauts are not allowed to eat beans before they go into space because passing wind in a spacesuit damages them.

(62) Back in the mid to late 80s, an IBM compatible computer wasn’t considered 100% compatible unless it could run Microsoft’s Flight Simulator.