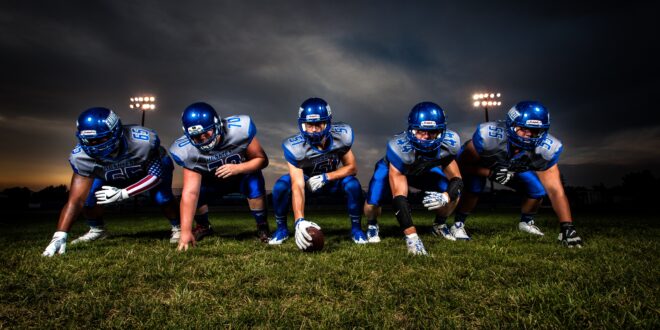 Between the innocence of boyhood and the dignity of manhood we find a sturdy creature called a football player! Football players come in assorted weights, heights, jersey colors, and numbers, but all football players have the same creed: to play every minute of every period of every game to the best of their ability.

Football players are found everywhere–underneath the enemy, on top of the enemy, running around, jumping over, passing by, twisting from, or diving through the enemy. Teammates rib them, officials penalize them, students cheer them, kid brothers idolize them, coaches criticize them, and parents worry about them. A football player is courage in cleats, hope in a helmet, pride in pads, and the best of young manhood in sweat socks!

When your team is behind, a football player is incompetent, careless, indecisive, lazy, and uncoordinated. Just when your team threatens to turn the tide of battle, he misses a block, fumbles the ball, drops a pass, jumps offside, falls down, runs the wrong way, or just forgets his assignment. A football player is a composite: He eats like Notre Dame, sleeps like Notre Dame, but more than not, he plays like Po Dunk High. To an opponent’s publicity man, he has the speed of a gazelle, the strength of an ox, the size of an elephant, the cunningness of a fox, and the agility of Red Grange, Glen Davis, Bronco Nagurski and Jim Thorpe combined! To his coach, he has–for media purposes–the stability of mush, the fleetness of a snail, the mentality of a mule, and he has about as much chance of playing as would his grandfather. To alumni, a football player will never kick as well, give as little ground, score as many points, or generate nearly the same amount of spirit as did those players of his yesteryear.

A football player likes game films, trips away from home, practice without pads, hot showers, long runs, recovered fumbles, points after TDs, and the quiet satisfaction that comes from being part of a perfectly executed play. He is not too much for wind sprints, sitting on the bench, scouting reports, or calisthenics, after-game compliments, ankle wraps, rainy days, or the out-of-season workouts. No one else looks forward so much to September or so little to December. Nobody gets so much pleasure out of knocking down, hauling out, or just bringing down the enemy. Nobody else can cram as much into one mind–assignments for an end run, off-tackle, a jump pass, a dive play, punt protection, kickoff returns, a goal line stand, or a special play that is designed to result in a TD every time it is called.

A football player is a wonderful creature: You can criticize him, but you can’t discourage him. You can defeat his team, but you can’t make him quit. Might as well admit it–be you alumnus, alumna, coach or fan–he is our personal representative on the field, our symbol of fair play. He may not be an All American, but he is an example of the American Way. He is not judged for his race, color or creed, not for his social standing, not for his finances, but for the democratic yardstick of how well he blocks, tackles, and sacrifices individual glory for the overall success of his team! He is a hard-working, untiring, determined kid doing the very best he can for his school! And when you come off the field cussing and feeling upset that the team lost, he can make you feel mighty proud with five spoken words: We did our best coach!