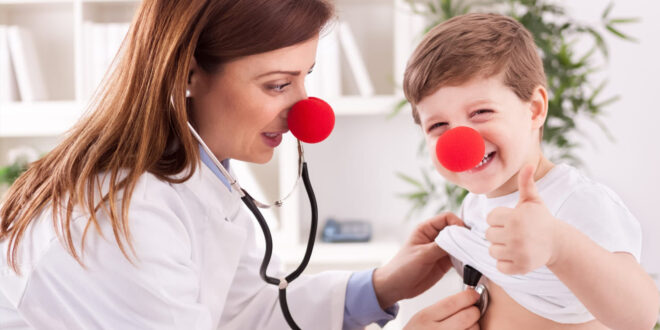 One day, in line at the cafeteria, Bob says to Stanley, “My elbow hurts like crazy. I guess I’d better see a doctor.”

“Listen, Bob, you don’t have to spend that kind of money,” Stan replies.
There’s a diagnostic computer down at Wal-Mart. Just give it a urine sample and the computer will tell you what’s wrong and what to do about it. It takes ten seconds and costs ten dollars… a lot cheaper than a doctor.”

So, Bob fills a small jar with his urine and takes it to Wal-Mart He deposits ten dollars, and the computer lights up and asks for the urine sample. He pours the sample into the slot and waits. Ten seconds later, the computer ejects a printout: “You have tennis elbow. Soak your arm in warm water and avoid heavy activity. It will improve in two weeks. Here is a Doctors certificate for your employer.”

That evening, while thinking how amazing this new technology was, Bob began wondering if the computer could be fooled. He mixed some tap water, a urine sample from his dog, urine samples from his wife and daughter, and some water out of his favorite fishing hole, just for good measure.

He then went back to Wal-Mart, eager to test the computer. He deposits ten dollars, pours in his concoction, and waits.

In ten seconds the computer prints the following: “1. Your tap water is too hard. Get a water softener. 2. Your dog has ringworm. Bathe him with anti-fungal shampoo. 3. Your daughter has a cocaine habit. Get her into rehab. 4. Your wife is pregnant –Twins. They aren’t yours. Get a lawyer. 5. If you don’t stop fishing, your elbow will never get better.”

“And, as always… Thank you for shopping at Wal-Mart.”

A SHORT HISTORY OF MEDICINE: “Doctor, I have an ear ache.”

Two doctors and an HMO manager died and lined up at the pearly gates for admission to heaven. St. Peter asked them to identify themselves.

One doctor stepped forward and said, “I was a pediatric spine surgeon and helped kids overcome their deformities.”

The second doctor said, “I was a psychiatrist. I helped people rehabilitate themselves.” St. Peter also invited him in.

The third applicant stepped forward and said, “I was an HMO Manager. I helped people get cost-effective health care.”

But, as the HMO Manager walked by, St. Peter added, “You can only stay three days. After that you can go to hell.”

A mechanic was removing a cylinder-head from the motor of a Harley motorcycle when he spotted a well-known cardiologist in his shop.

The cardiologist was there waiting for the service manager to come and take a look at his bike when the mechanic shouted  across the Garage, ‘Hey Doc, want to take a look at this?’

The cardiologist, a bit surprised, walked over to where the mechanic was working on the motorcycle. The mechanic straightened up, wiped his hands on a rag and asked, “So Doc, look at this engine. I opened its heart, took the valves out, repaired any damage, and then put them back in, and when I finish, it works just like new… So how come I make $39,675 a year and you get the really big bucks ($1,695,759), when you and I are doing basically the same work?’

The cardiologist paused, smiled and leaned over, then whispered to the mechanic… “Try doing it with the engine running.”

A baseball manager who had an ulcer was in his physician office for a checkup. “Remember,” the doctor said, “don’t get excited, don’t get mad, and forget about baseball when you’re off the field.” Then he added, “By the way, how come you let the pitcher bat yesterday with the tying run on second and two men out in the ninth?”

A woman was terribly overweight, so her doctor put her on a diet.

“I want you to eat regularly for 2 days, then skip a day, and repeat this procedure for 2 weeks. The next time I see you, you’ll have lost at least 5 pounds,” the doctor assured.

When the woman returned, she shocked the doctor by losing nearly 20 pounds.

“Why, that’s amazing!” the doctor said, “Did you follow my instructions?”

The woman nodded and said, “I’ll tell you though, I thought I was going to drop dead that third day.”

“From hunger, you mean?” he asked.

The first surgeon, from New York, says, “I like to see accountants on my operating table because, when you open them up, everything inside is numbered.”

The second, from Chicago, responds, “Yeah, but you should try electricians! Everything inside them is color-coded.”

The third surgeon, from Dallas, says, “No, I really think librarians are the best; everything inside them is in alphabetical order.”

The fourth surgeon, from Los Angeles, chimes in: “You know, I like construction workers. Those guys always understand when you have a few parts left over.”

But the fifth surgeon, from Washington, DC, shut them all up when he observed: “You’re all wrong. Politicians are the easiest to operate on. There’s no guts, no heart, no balls, no brains and no spine, and the head and the ass are interchangeable.”

A young woman went to her doctor complaining of pain.

“Where are you hurting?” asked the doctor.

“You have to help me, I hurt all over”, said the woman.

“What do you mean, all over?” asked the doctor, “be a little more specific.”

The doctor checked her thoughtfully for a moment and told her his diagnosis, “You have a broken finger.”

A man went to see his doctor because he was suffering from a miserable cold. His doctor prescribed some pills, but they didn’t help.

On his next visit the doctor gave him a shot, but that didn’t do any good.

On his third visit the doctor told the man, “Go home and take a hot bath. As soon as you finish bathing throw open all the windows and stand in the draft.”

“But doc,” protested the patient, “if I do that, I’ll get pneumonia.”

“I know,” said the doctor, “I can cure pneumonia.”

A pipe burst in a doctor’s house. He called a plumber. The plumber arrived, unpacked his tools, did mysterious plumber-type things for a while, and handed the doctor a bill for $600.

The doctor exclaimed, “This is ridiculous! I don’t even make that much as a doctor!.”

The plumber quietly answered, “Neither did I when I was a doctor.”

A fellow walked into a doctor’s office and the receptionist asked him what he had.

So she took down his name, address, medical insurance number and told him to have a seat.

A few minutes later a nurse’s aid came out and asked him what he had.

So she took down his height, weight, a complete medical history and told him to wait in the examining room.

Ten minutes later a nurse came in and asked him what he had.

So she gave him a blood test, a blood pressure test, an electrocardiogram, told him to take off all his clothes and wait for the doctor.

Fifteen minutes later the doctor came in and asked him what he had.

The doctor said, “Where?”

He said, “Outside in the truck. Where do you want them?”

A woman, calling Mount Sinai Hospital, said, “Hello, I want to know if a patient is getting better.”

The voice on the other end of the line said, “What is the patient’s name and room number?”

He said, “Oh, yes. Mrs. Finkel is doing very well. In fact, she’s had two full meals, her blood pressure is fine, she’s going to be taken off the heart monitor in a couple of hours and if she continues this improvement, Dr. Cohen is going to send her home Tuesday.”

The man on the phone said, “From your enthusiasm, I take it you must be a close family member or a very close friend!”

Three doctors are in the duck blind and a bird flies overhead. The general practitioner looks at it and says, “Looks like a duck, flies like a duck… it’s probably a duck,” shoots at it but misses and the bird flies away.

The next bird flies overhead, and the pathologist looks at it, then looks through the pages of a bird manual, and says, “Hmmmm…green wings, yellow bill, quacking sound…might be a duck.” He raises his gun to shoot it, but the bird is long gone.

A third bird flies over. The surgeon raises his gun and shoots almost without looking, brings the bird down, and turns to the pathologist and says, “Go see if that was a duck.”

User Rating: Be the first one !
Share
Previous Village of 100
Next Redneck Culture