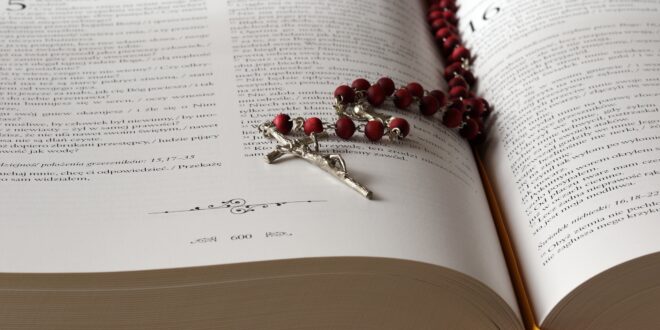 RIVER EDGE, N.J.– Each Sunday for decades, Roman Catholic priests have offered the blessing Lord be with you. And each Sunday, parishioners would respond, And also with you.

Come Nov. 27, the response will be, And with your spirit. And so will begin a small revolution in a tradition-rich faith.

At the end of the month, parishes in English-speaking countries will begin to use a new translation of the Roman Missal, the ritual text of prayers and instructions for celebrating Mass.

International committees of specialists worked under a Vatican directive to hew close to the Latin, sparking often bitter protests by English speakers over phrasing and readability.

After years of revisions negotiated by bishops’ conferences and the Holy See, dioceses are preparing anxious clergy and parishioners for the rollout, one of the biggest changes in Catholic worship in generations.

“We are tinkering with a very intimate and personal moment,” said the Rev. Richard Hilgartner, executive director of the worship office for the U.S. Conference of Catholic Bishops. “It’s public worship, it’s the church’s official public prayer, but for the individual faithful, it’s one of the primary means of their encounter with the Lord.”

The biggest challenge will be for priests, who must learn intricate new speaking parts often late in their years of service to the church. At an Archdiocese of Newark training at St. Peter the Apostle Church in River Edge, many clergy had just received a final published copy of the Missal, a thick hardcover bound in red, accompanied by an equally dense study guide. Earlier drafts had been available for orientation sessions that have been ongoing for months nationwide.

Many clergy are upset by the new language, calling it awkward and hard to understand. The Rev. Tom Iwanowski, pastor of St. Joseph Roman Catholic Church in Oradell and New Milford, N.J., turned to the section of the new missal that calls funeral rites, “the fraternal offices of burial.”

“How can I say those words? It doesn’t make sense,” said Iwanowski, who has been a priest for 36 years. “It separates religion from real life.”

In the new translation, in the Nicene Creed, the phrase “one in Being with the Father,” will change to “consubstantial with the Father.” When a priest prays over the Holy Communion bread and wine, he will ask God for blessings “by sending down your spirit upon them like the dewfall.”

The new missal grew out of changes in liturgy that started with the Second Vatican Council, the 1960s meetings on modernizing the church that permitted Mass in local languages instead of Latin. Bishops in English-speaking countries created the International Commission on English in the Liturgy to undertake the translation.

The panel produced a missal by 1973, but that version was considered temporary until better texts could be completed. As the commission worked to make the Mass more familiar in idiomatic English, some of the language strayed from the Latin. Also in some cases, the commission sought to use language that would be gender neutral.

The work took a new direction in 2001, when the Vatican office in charge of worship issued the directive Liturgiam Authenticam, or Authentic Liturgy, which required translations closer to the Latin. The Vatican also appointed another committee, Vox Clara, or Clear Voice, to oversee the English translation, drawing complaints from some clergy and liturgists that the Vatican was controlling what should be a more consultative process. (Cardinal George Pell, the Sydney, Australia, archbishop and chairman of Vox Clara, has called the complaints baseless and ideologically driven.)

The Rev. Anthony Ruff, a Benedictine monk and theology professor at St. John’s University in Minnesota, said he was removed last year as head of the music panel of the international translating commission because of criticisms he posted on his blog. In an open letter to U.S. bishops published in the Jesuit magazine America, Ruff cancelled his plans to speak on the text to diocesan priests because, “I cannot promote the new missal translation with integrity.”

In South Africa, church officials accidentally introduced much of the new text in parishes ahead of schedule in late 2008, generating similar complaints about ponderous language, though church officials now say most parishioners have adapted.

Jeffrey Tucker, a lay musician at St. Michael the Archangel Catholic Church in Auburn, Ala., said he also had concerns about how the translation was handled. Still, he said he found the new missal “extraordinary.” The text and music are truly integrated for the first time since the changes from the Second Vatican Council, Tucker said. He has been introducing the new text to lay people and church leaders in recent months, and has found the reaction to mostly be, “Oh, wow.”

“The language is more accurate, but that is the most boring thing you can say about it. The more important thing about the language is that it’s beautiful,” said Tucker who is managing editor of Sacred Music, the journal of the Church Music Association of America. “Hardly anything ever good comes out of a committee. This time it did.”

Parishes around the United States have spent the summer trying to prepare church members for what’s ahead. Priests have been discussing the changes in homilies, in notices in parish bulletins, and in workshops and webinars. Many clergy plan to use poster-sized laminated cue cards for parishioners as the new text is introduced. The introduction of the new text comes on the first Sunday of Advent, just ahead of the Christmas season, a time when infrequent churchgoers attend services.

The Catholic Community at Pleasanton, Calif., which serves 5,000 families in the Diocese of Oakland, has been organizing ministry training sessions and town hall meetings for parishioners to ask questions and express concerns. Mark J. Sullivan, the church music director, said he has seen reactions range from people fully embracing the change to others asking, “Why now?”

“They say, ‘I’ve got everything memorized. Why are you messing with it?'” Sullivan said. “If people do get a little nervous, it’s because things are in a different place, and it is more content, but it’s more for great reasons. We’ve got more to work with.”

The Rev. Michael Ryan, pastor of St. James Cathedral in Seattle, started an online petition called, “What If We Just Said Wait,” that drew more than 22,000 signatures from clergy, lay people, liturgists and others around the world, who urged a limited, one-year introduction of the new translation followed by an evaluation before the text was adopted across the country.

Despite the protest, Ryan said he has been preparing parishioners for the change and he will be ready to recite the new text on Nov. 27.

“I’m not going to stand apart from the church,” Ryan said.