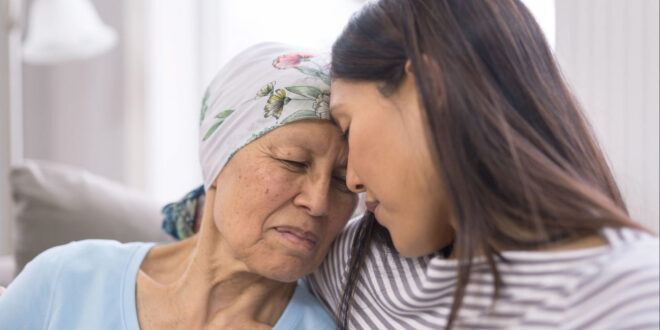 As a Hospice Volunteer, I’m told my Nursing Home patient is not responsive to stimulation. She doesn’t respond to anyone. She doesn’t speak. She doesn’t show emotion. When I visited, even though it was July, I ‘played’ a tape of Christmas Carols… something we all can relate to…something we’re all familiar with. She has dementia. She has forgotten so much. She has forgotten how to live. I hold her hands. I look into her eyes. I talk to her as the music plays. I watch as I see a smile upon her face. I listen as she tries to speak. I hug her. I remind her she is a ‘child of God’. I remind her of the gift He is to each of us. As we listen to songs that speak of His birth, I remind her that He died for us. He hung upon the Cross at Calvary for our sins.

I glance around to see her friend has tears streaming down his face. Why? “She hasn’t smiled or spoken for so long…I can’t remember”, he says. He’s been there every day for 8 years to watch over her. He has been there but everyone has told him she doesn’t respond. So he just sits with her. He does what he can, but frankly, he doesn’t know what to do. He too is lost. He has watched her plight as she diminished in health over the years, but he never let her down in his faithfulness to her. He was always a loving presence for her. Now, once again, he has just seen ‘a spark’ in his sweet lady. He too smiles.

Most every time I visited after that I’d find him…There in her room, talking to her, as he held her hand and he never left without telling her “I love you” and hugging her. There wasn’t much response…but there was ‘that little bit’ and he reached out for it on every visit. One day, as he was about to leave he reached behind her to hug me. He then said “I love you” to her, as he has so many times before. She doesn’t respond. He walks past her to leave, his back to her, and says “She knows I love her, don’t you gal?”. There! A sudden, loud ‘Yes’ is in the air. She spoke. He moved on. He couldn’t stop. He couldn’t compose himself. She’d confirmed what we all knew by then. She heard. She loved. She was trying so hard to express herself.

Did I make a difference? Yes…But only because I was trained to believe that hearing is the last sense to leave us. I leaned heavily on that belief and her friend learned from me. No one had ever told him what to do, how he could communicate with her, that she might hear him though she didn’t respond, so he had given up. But he never gave up on loving her. He never gave up on coming to check on her.

Now she responds. It’s a smile…a word here and there…a little move of her fingers against his as he hold her hands. But it’s all communication. She had it all along. Is it because no one was listening to her? Because no one was talking to her? I suppose. But that’s all changed.

One night I sit in a chair beside her bed and told her how fortunate she was to have someone to come visit her each day, reminding her of how much he loved her! How much I loved her! How very much God loved her! I knew in my heart she understood me. I cried as I talked. I let my emotions go. She squeezed my hand, as I saw tears roll from her eyes. She did hear. She remembered love and compassion, though she may have forgotten all else over the years.

The circumstances are different…but that’s the way God is toward us. We forget Him. We put Him aside for worldly things. And though we think He isn’t hearing us, when we call out to Him, He is there. He is our Guide and our Protector. He constantly shows us Love and Compassion, but we have to open our hearts to hear Him and feel His warmth. Only then can we truly share Him with others…like this woman who may have needed to be reminded that God was still with her.

I stayed with her the night she died. Her face glowed with “the peace of God, which passeth all understanding”, as she took her last breath. Philippians 4 describes it best.