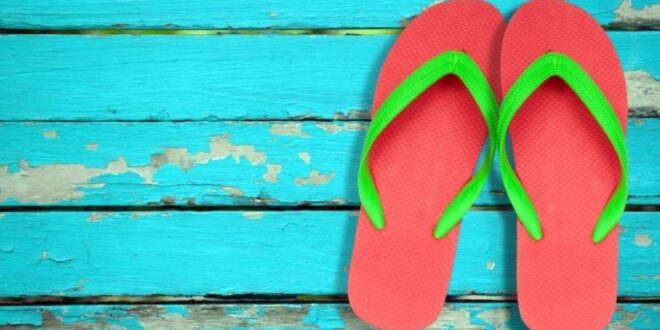 “I WOULDN’T WANT THIS HAPPEN TO ANY OF YOU!”– CHERYL

This is a combination of story, journal entries, and pictures from a woman who says she got chemical burns from wearing a pair of inexpensive flip-flop shoes or thongs purchased from Wal-Mart. Cheryl was employed at the store she got them from and bought two pair before leaving for a vacation trip.

This is one of the more elaborate forwarded emails ever seen.  To view the entire story, and photos, visit TruthorFiction.com for more details – here!

The email included more than 30 pictures documenting a woman’s painful ordeal that she says was the result of a chemical burn from a pair of leisure flip-flops or thongs purchased from Wal-Mart in late August, 2007. See photos below.

When millions of products like these “Sand-N-Sun” thongs are released on the market, it’s not hard to imagine that someone somewhere might experience a reaction to one of them.  People are allergic to a wide variety of substances that might not affect others in the population.

It turns out, however, that this woman’s experience is not an isolated one.

A Fox News article dated September 12 said that at least 10 people were affected in similar ways and that Wal-Mart has stopped selling them.  Wal-Mart spokesperson, John Simley, told Fox News that there have been about 7-million of the thongs sold through Wal-Mart, but the company is testing them and other Sand-N-Sun products.  It has not yet been determined what exactly caused the skin reactions.

Some versions of the story refer to the shoes as sandals and some say they are from a Chinese manufacturer.

If you pass this on to others, you could possibly save someone from a lot of pain and suffering. Please use the ‘SHARE’ button (lower left) to email or share this message with your ‘social network.’ Thank you!