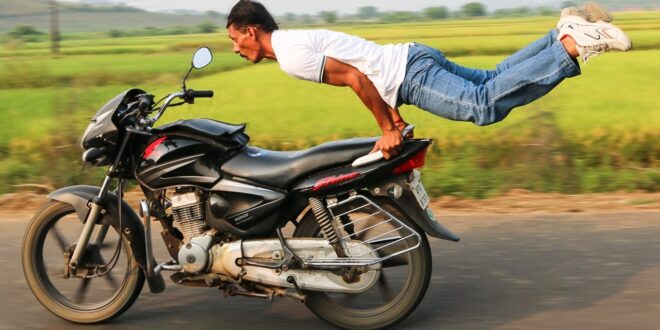 True Story – An article from the Miami Herald, June 1998

A man was working on his motorcycle on his patio while his wife worked in the kitchen. He was  gunning the engine when the bike somehow lurched forward with the man still holding on. The bike crashed through the glass patio doors and ran into a wall, leaving the man cut and bruised on the living room floor.  The man’s wife called for an ambulance and then, since they lived on a fairly steep hill, went down several flights of stairs to direct the paramedics to her husband.

After the ambulance arrived and transported her husband to the hospital, the woman up-righted the motorcycle and pushed it outside.

Seeing that  gasoline had spilled on the floor, the wife cleaned it up with paper  towels, which she then threw in the toilet.

The man was treated and released from the hospital. When he arrived  home and saw the broken patio doors and damaged motorcycle, he became despondent and went into the bathroom and sat on the john to think for a while. He then lit a cigarette and tossed the match down between his legs into the toilet bowl.

Yep, you guessed it.

The wife heard the explosion and her husband screaming and ran in to find him lying face down with burns on his buttocks, the backs of his legs, and his groin. The paramedics loaded the man and started back down the stairs while the wife tried to explain what had happened. The paramedics got to laughing so hard that the one walking backwards lost his footing.

The gurney tilted and the patient slid off and rolled the rest of the way down the stairs  breaking his arm!

Now, has your day really been all that bad?