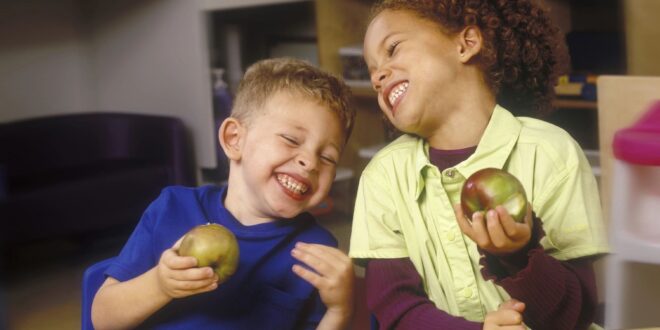 Nowhere will you find more truth and humor than the innocence of a child. Read what some children have said when approached with unique situations.

While I sat in the reception area of my doctor’s office, a woman rolled an elderly man in a wheelchair into the room. As she went to the receptionist’s desk, the man sat there, alone and silent.

Just as I was thinking I should make small talk with him, a little boy slipped off his mother’s lap and  walked over to the wheelchair.  Placing his hand on the man’s, he said, “I know how you feel. My mom makes me ride in the stroller too.”

As I was nursing my baby, my cousin’s six-year-old daughter, Krissy, came into the room.  Never having seen anyone breast feed before, she was intrigued and full of all kinds of questions about what I was doing.

After mulling over my answers, she remarked, “My mom has some of those, but I don’t think she knows how to use them.”

Out bicycling one day with my eight-year-old granddaughter, Carolyn, I got a  little wistful.  “In ten years,” I said, “you’ll want to  be with your friends and you won’t go walking, biking, and swimming with me like you do now.”

Carolyn shrugged.  “In ten years you’ll be too old to do all those things anyway.”

Working as a pediatric nurse, I had the difficult assignment of giving immunization shots to children.  One day, I entered the examining room to give four-year-old Lizzie her needle.

On the way back from a Cub Scout meeting, my grandson innocently said to my son, “Dad, I know babies come from mommies’ tummies, but how do they get there in the first place?”

After my son hemmed and hawed awhile,  my grandson finally spoke up in disgust, “You don’t have to make up something, Dad.  It’s okay if you don’t know the answer.”

Just before I was deployed to Iraq, I sat my eight-year-old son down and broke the news to him.  “I’m going to be away for a long time,” I told him. “I’m going to Iraq.”

Paul Newman founded the ‘Hole in the Wall Gang Camp’ for children stricken with cancer, AIDS, and blood diseases.  One afternoon, he and is wife, Joanne Woodward, stopped by to have lunch with the kids.

A counselor at a nearby table, suspecting the young patients wouldn’t know
Newman was a famous movie star, explained, “That’s the man who made this camp possible.  Maybe you’ve seen his picture on his salad dressing bottle?”

“Well, you’ve probably seen his face on his lemonade carton.”

An eight-year-old girl perked  up…  “How long was he missing?”

Kids were asked questions about the old and new testaments. The following statements about the Bible were written by children. They have not been retouched nor corrected, all incorrect spelling has been left in).

Previous Made in the USA: Spoiled brats
Next Funny One-Liners