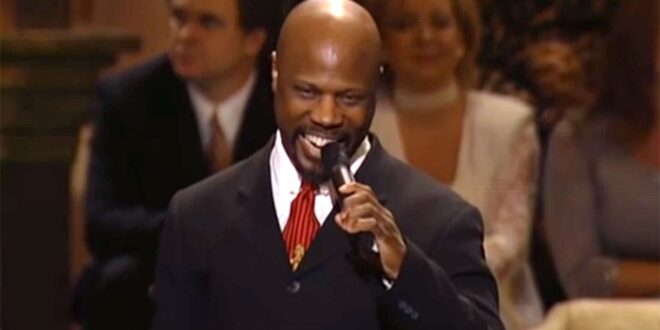 EDITOR’S NOTE: I personally love this story, because I am a bass singer in my church choir and I am sooo jealous of this man’s talent.

At Carnegie Hall, gospel singer Wintley Phipps delivers perhaps the most powerful rendition of Amazing Grace ever recorded. He is the President of the U.S. Dream Academy, an organization of children of prisoners.

At his concert at Carnegie Hall, Oct 28, 2013, he stated, “A lot of people don’t realize that just about all Negro spirituals are written on the black notes of the piano. Probably the most famous on this slave scale was written by John Newton, who used to be the captain of a slave ship, and many believe he heard this melody that sounds very much like a West African sorrow chant. And it has a haunting, haunting plaintive quality to it that reaches past your arrogance, past your pride, and it speaks to that part of you that’s in bondage. And we feel it. We feel it. It’s just one of the most amazing melodies in all of human history.” After sharing the noteworthy history of the song, Mr. Phipps delivers a stirring performance that brings the audience to its feet!

You can hear this historic performance below, starting at the 5-minute mark. If you care to hear the story mentioned above, start at the beginning of this video…

The power of gospel music and his gifted voice have taken the U.S. Dream Academy’s founder and CEO, Wintley Phipps, around the world and placed him before audiences that have included the last six Presidents of the United States. He has performed for Jimmy Carter, Ronald Reagan, George H.W. Bush, Bill Clinton, George W. Bush, and Barack Obama at several National Prayer Breakfast events and other celebrations. He performed for the 1984 and 1988 Democratic National Conventions, Rosa Parks’ 77th Birthday gala at the Kennedy Center, Mother Teresa of Calcutta, and former South African President Nelson Mandela. He has appeared on programs such as the Dr. Martin Luther King Jr. television special, Dr. Robert Schuller’s Hour of Power Telecast, and the Billy Graham Crusades; at the Vatican, and as guest soloist at Diana Ross’s wedding ceremony in Switzerland,; and on Saturday Night Live,Soul Train, and The Oprah Winfrey Show. He has conducted lectures in Europe, Australia, Asia, Africa, and North and South America.

The U.S. Dream Academy is helping our nation’s children reach for their dreams. Through academic, social, and values enrichment, we empower those children most at risk of incarceration to believe in themselves and to succeed.

Across the nation, there are millions of young people living in high crime and high poverty communities, who fear they may not live to be an adult. For those young people who also have a parent incarcerated, the future may be even more bleak. For these young people an absent parent, family instability, the stigma and shame of parental incarceration converges with poverty, crime and failing public schools to create a dangerous mix of risk factors that significantly increase a child’s chances of school failure and future incarceration. Without an intervention this cycle will continue.

To read, see and hear more about the U.S. Dream Academy, click here >

Previous Bad Ass
Next The Second on the Wall