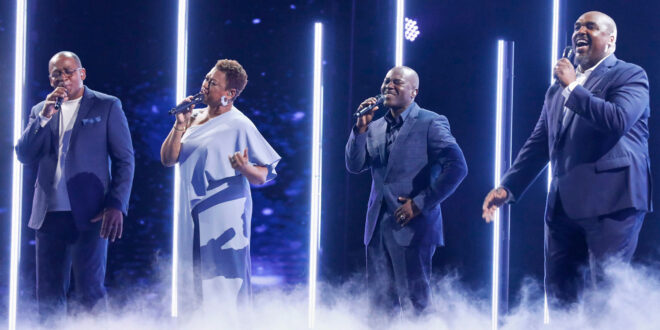 America’s Singing Troops is a special Inspire21 page featuring songs by some of USA’s Heroes and how they are performing today.

These soldiers are bridging the gap between armed forces and America through song.

What do soldiers do after they leave the service? If they can sing, maybe they form a group, make a CD, and perform on U.S. Army bases to inspire other soldiers. At least that’s what the members of 4TROOPS did.

Retired Staff Sgt. Ron Henry, 41, former Capt. Meredith Melcher, 29, and former Sgts. Daniel Jens, 36, and David Clemo, 31—all of whom served multiple tours in Iraq or Afghanistan—sing a mix of pop and country, including “Here We’ve Been,” with its opening lines “Raised my hand/Raised my weapon/Now I raise my voice .” Listen to them sing “For freedom” below.

The vocalists, whose album was released by Sony Masterworks, are touring military bases around the country and will donate a portion of proceeds from the sale of their CD to veterans’ charities. “We hope our music will help bridge the gap between the armed forces and the rest of America,” Henry says.

Voices of Service – America’s Got Talent 2019

Wow! This singing quartet of veterans and active duty service members perform “Rise” by Katy Perry like you’ve never heard it before. Watch how they auditioned for America’s Got Talent the first time, and learn how they came together in active service for America.

We hope to provide more entertainment by the talented service member of America’s Military men and Women soon. In the meantime, please share this page with others so they can witness the talent they all possess. Thank you.

Previous Cemetery Watchman
Next The Glasses