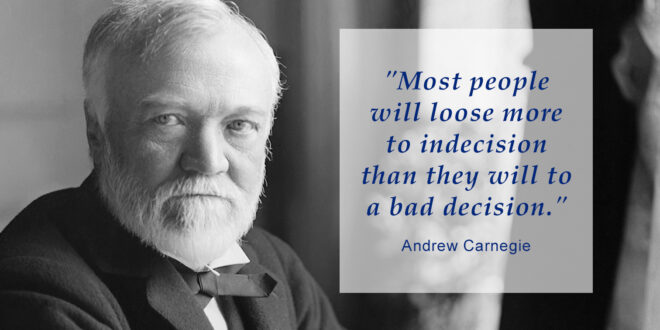 “Most people will loose more to indecision than they will to a bad decision.”
— Andrew Carnegie

This is not only the truth; it is the Number One reason people remain unsuccessful in their lives. Even the unsuccessful people aware of this principle remain unconvinced of how powerful decisions are and how debilitating indecision can be.

Let me ask you this…

If someone asked you to give up the next 20 years of your life, without being paid, how long would it take you to make that decision?

Maybe you know the story of Andrew Carnegie (believed to be the world’s first Billionaire – see footnote below).

He called a young cub reporter into his office and asked him to devote 20 years to interviewing only the world’s richest people in order to share ‘The Secret’ of wealth, success, and happiness with the rest of the world.

But, did you know that Mr. Carnegie secretly held a stopwatch beneath his desk and gave Napoleon Hill only 60 seconds to answer yes or no before he would lose the opportunity forever? Mr. Carnegie knew that if Napoleon required more time to think about it then he was the wrong guy.

Napoleon Hill took 32 seconds to say YES… and his lack of indecision led to the writing of “Think and Grow Rich,” the best-selling book responsible for helping to create an estimated One Million Millionaires!

Born into poverty in 1883, Napoleon Hill rose to become one of the world’s most distinguished and respected authors of all time. He moved from newspaper reporter to law student to working for Andrew Carnegie, and became a confidant and advisor to businessmen and presidents. Hill has counted among his many associates Franklin D. Roosevelt, Mahatma Gandhi, Thomas Edison, Henry Ford, and hundreds of other world leaders.
———–

Andrew Carnegie, Philanthropist
Can you imagine becoming the richest person in the world and then giving your money away? That’s exactly what Andrew Carnegie did. After retiring in 1901 at the age of 66 as the world’s richest man, Andrew Carnegie wanted to become a philanthropist, a person who gives money to good causes. He believed in the “Gospel of Wealth,” which meant that wealthy people were morally obligated to give their money back to others in society.

Previous Three Feet From Gold
Next Happiness is a Journey